Legendary singer and composer Bappi Lahiri rocked Zee Bangla Mirakkel Program on 20th December, 2011. He was the star of the show and the anchor Mir Afsar Ali gave him lot of love and respect.

Bappi Lahiri sang the song “ooh lala ooh lala” from the film Dirty Picture, which had been sung by Bappi Lahiri and Shreya Ghoshal. Everyone cheered at the song, as the song and the film both are doing excellent business.

Bappi Lahiri said that the compositions of the 80s were so popular that they are still sung today in cyclic order. He also sang the song “ek aankh marun to parda phat jaye”, which he was composed by him. He said even the song “yaad aa raha hai” from the film Disco Dancer, in 1982, had been used in the film Golmaal 3. 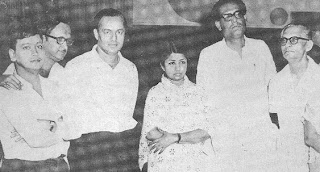 The performers Palash Adhikari, Fatik Purokayet, Sajal, Istiaq Nasir, Abu Henna Ronnie, performed in front of Bappi Lahiri and the judges Paran Banerjee, Srilekha Mitra and Rajatavo Dutta. Bappi Lahiri appreciated all the participants and told them to do even better in the coming episodes. He was happy to see his own photograph in the screen at the age of 4 years with singer Lata Mangeshkar.
Posted by Souvik Chatterji at 6:38 AM