The viewers of bollywood films wish happy birthday to successful actor Shatrughun Sinha on 9th December, 2011. He was considered to be one of the leading angry young man of the 70s after Big B.

Although he started his career as anti-hero in films like Khilouna, where the central characters were played by Jeetender and Sanjeev Kumar, within short time, he showed his metal as an action star and ruled bollywood films for another 20 years. He also did well in the film Ek Nari Ek Brahmchari. He was successful in films like Gaye Aur Gauri opposite Jaya Bacchan, Bombay To Goa, etc., in the early 70s.

Shatrughun Sinha learned acting Pune Film and Television Institute and his lessons went a long way in his illustrious career. He had seen other giants in the Pune Film and Television Institute like Hritik Ghatak, Subhash Ghai, etc. Viewers remember his combination with Reena Roy as both played romantic pair in numerous films. Kalicharan was one of the most popular films amongst them.

The other films where Big and Shotgun (Shatrughun Sinha was called by this name) met included Kala Patthar, Dostana, Naseeb, to mention a few. In Kala Patthar there was an encounter scene with Amitabh Bacchan, which was as popular as the encounter of Vinod Khanna with Amitabh Bacchan in Amar Akbar Anthony. In all those films both the actors complimented each other. Even in comedy films like Naram Garam, Shotgun showed his comedy elements and was appreciated.

Shatrughun Sinha was given an off-beat role by Goutam Ghosh in Bengali film Antarjali Jatra where he played the role of a cremator. He played a marathon innings in films which include commercial success like Goutam Govinda, Dillagi, etc. Even in political career he achieved a lot by working for the people under the BJP banner. He was member of Rajya Sabha and won elections also under BJP ticket. He is called the stylish Bihari Babu by his admirers. He must be a proud father after his daughter Sonakshi Sinha had stormed bollywood with her superhit debut opposite Salman Khan in the film Dabanng released this year. 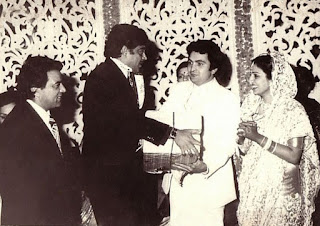 Dharmender, Shatrughun Sinha, Rishi Kapoor, Nitu Singh
Both Shatrughun Sinha and Vinod Khanna are considered the greatest competitors with Big B and had succeeded in portraying the role of action heroes in India. Their height, voice and stature helped a lot in portraying those characters. The viewers expect Shotgun to continue the great work in films in future.
Posted by Souvik Chatterji at 7:26 AM