Hollywood film Catacombs created a very horrid experience for the viewers. The film had been directed by Tomm Coker and David Elliot. It was released in 2007.

In the film Shannyn Sossamon came to Paris, France on the invitation of her sister Pink (Alecia Moore). She entered a graveyard in Paris called Catacombs with her sister Pink and her friends and she did not even require entry fees to get in.

An introductory speech was given at the place by Mihai Stanescu. Shannyn was told that there was a killer called antichrist who killed everyone who got lost in the graveyard. She believed it. For the rest of the film she was encountered by horrifying images of skulls, human bones that were kept in open in the underground caves. 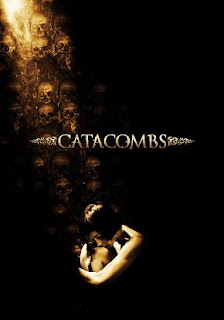 Poster of film Catacombs.
A man with a goat mask even chased her. After she faced the harassment, Alecia Moore told her that everything was planned to scare her. She got so irritated that she started killing each and every friend. She left the Catacombs with blood and went o Paris Airport. The film did good business. The film still has a huge horror appeal. The performance of Alecia Moore, Shannyn Sossamon and others were excellent.
Posted by Souvik Chatterji at 8:01 AM