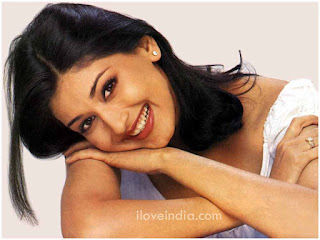 The viewers of bollywood films wish happy birthday to Sonali Bendre on 1st January, 2012. Sonali Bendre showed a lot of promise in the 90s when she joined bollywood films. She had spontaneity in her performance and did not imitate any star.  She was sublime in Aamir Khan’s film Sarfarosh.

Sarfarosh was the film based on the story of an honest police officer who addressed the corruption existing in the police department itself and the other wings of the Govt. Sonali Bendre ably assisted Aamir Khan in his noble mission. Jagjit Singh’s song “husnwale” became very successful.

Her performance in Sunil Shetty’s film Bhai requires special mention. Although she loved Sunil Shetty like Pooja Batra but when she knew that Pooja Batra was also attached to him, she sacrificed her love. She died at the end of the film while fighting for the cause of Sunil Shetty. In fact she helped Sunil Shetty to learn urbanized style of living as he came from the hills and was uneducated.

She acted in completely different role opposite Shahrukh Khan in the film Duplicate. Shahrukh Khan played a double role in the film, one having an affair with Juhi Chawla while the other having an affair with Sonali Bendre. She acted opposite Shahrukh Khan who played the role of the smuggler. From the time the two characters interchanged Sonali Bendre expressed the astonishment in style. Her lips in the song “mere mehboob mere sanam” require special mention. Although the film had mainly comedy element in it, the powerful performance of Sonali Bendre and Juhi Chawla helped the film to be successful.

After success in films like Jis Desh Me Ganga Rehta Hai with Govinda, Major Sahab, etc., she left films in 2002. He appeared in many TV programs in a number of private channels, in some of them being the judges of those programs. But she was not found in prominent roles in the films released in the last few years. The viewers expect her to make a comeback in character roles in future.
Posted by Souvik Chatterji at 7:18 AM