Kingkong 1976 was the best film in Kingkong series ever made.

Kingkong 1976 was the best film in Kingkong series ever made.

The Hollywood film Kingkong made in 1976 was the best film in Kingkong series ever made. Although the film was made by director John Guillermin for the children, even older people enjoyed the film.

In the film, a crew full of people was travelling towards an island close to Indonesia including the central characters played by Jeff Bridges and Charles Grodin. The crew was filled with members who were related to an oil expedition company. In one of the islands when they landed they saw few indigenous tribes worshipping someone with celebration. There was deposit of oil in the place. The primitive tribe built a wall around themselves to save them from Kingkong. The crew of people took photos. Then the tribes saw the beautiful girl played by Jessica Lange in the crew and wanted her. Other members of the crew fired blankly in the air and came back in the ship.

At night when the ship was some distance away from the shores, the girl climbed down the stairs and enjoyed the moon alone in a wooden raft tied to the ship. Few of the tribes abducted her and kept her as prey for the giant Kingkong. Kingkong took her and fell in love with her.

Kingkong took her to waterfalls and helped her to have bath. Later a trap was set for Kingkong and he was brought to USA in ship. When a show was being held, the moment Kingkong saw the girl being touched by others, he broke the chain and destroyed property. Then he carried the girl in his hand. At the end of the film the US Security killed Kingkong when he climbed up the World Trade Centre. 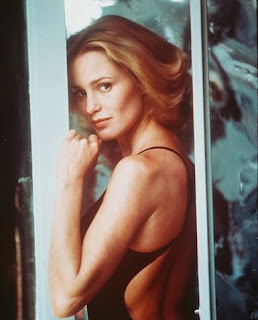 Jessica Lange
Actress Jessica Lange won Golden Globe award for best debut in motion pictures. Jessica Lange’s expressions in the film were absolutely genuine and natural. The photography in the film was of excellent quality. The film was ahead of its time. Although some of the critics said that the film was related to fantasy and nothing was great excepting special effects, the film still stands tall in the depiction of the appearance of giant ape like Kingkong. The mask of Kingkong was made of plastic skull and separate were required to provide distinct expressions.
Posted by Souvik Chatterji at 4:48 PM