No Problem should get a good opening. 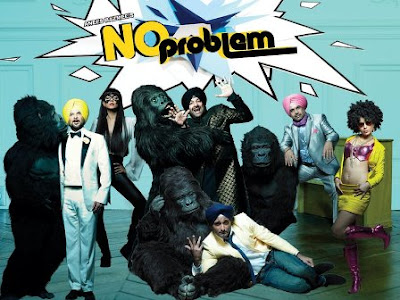 No Problem should get a good opening.

Anil Kapoor’s new film No Problem which is slated to release on 10th December, 2010, should get a good opening. The film had been directed by Aneez Bazmee. He had directed other super hit films in the past including No Entry. Anil Kapoor deserved a whole-hearted response from the audience because he had been an institution by himself in respect of comedy films. Most of those films did excellent business including Mr. India, Ram Lakhan, Jamai Raja, No Entry. The list can go on. In many terms he had remained a very underrated actor inspite of showing his versatility in every type of role including action based characters, romantic roles and comedy roles. Besides, after Dilip Kumar and Sanjeev Kumar, he had been one of the actors who concentrated more on the depiction of the character rather than the beauty and glamour as done by the majority actors. None of his characters played till now have any similarity. His performance in Tezaab, had no similarity with that of Ishwaar, or that of 1942 – A Love Story.

In No Problem, Akshay Khanna and Sanjay Dutt were bank robbers. While they robbed a bank in a village, the bank officer, namely Paresh Rawal got involved too. Anil Kapoor played the role of investigating officer who had handled many crooks in his life. He got married to Sushmita Sen. She had been the daughter of the Commissioner of Police played by Shakti Kapoor. Sushmita Sen had played the role of a split personality.

On one moment she had been a caring mother and wife. On the other moment she inclined to kill her husband. Anil Kapoor was inclined to chase Sunil Shetty who was alleged to have stolen diamonds. On the other hand, Paresh Rawal searced for Sanjay Dutt and Akshay Khanna to prove his innocence.

The performance of Anil Kapoor, SanjayDutt, Paresh Rawal and Akshay Khanna had been excellent. Sushmita Sen was brilliant in the films Maine Pya Kyun Kiya and Do Not Disturb. She did even better in this film. The music had been composed by Sajid Wajid, Pritam Chakravarty and Anand Raj Anand. The songs “no problem” sung by Wajid. Kamaal Khan, and others and “shakira” sung by Hard Kaur and Kalpana had been popular.

The film should do well.
Posted by Souvik Chatterji at 8:29 AM