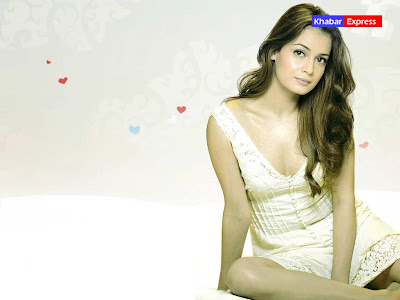 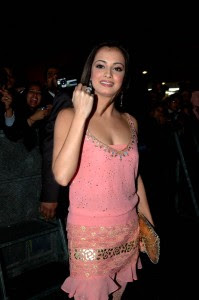 The viewers of bollywood films wish happy birthday to sweet star Diya Mirza on 9th December, 2010. Diya Mirza, the decent actress of bollywood films has to go a long way to maintain her stardom and feature in the films of leading producers and directors of bollywood industry. Dia Mirza, better known as Dia Mirza Handrich, was born on December 9th, 1981. She was runner up in Miss India 2000 Beauty contest.

She was the daughter of German interior designer named Frank Handrich and Bengali mother named Deepa Handrich. Her father died and her mother remarried Ahmed Mirza, and she retained the surname of her second father. When she entered films her initial ventures like Rehna Hai Tere Dil Mein, Deewanapan did not impress the viewers to that extent.

But her film Tumko Na Bhool Payenge, opposite Salman Khan, became very successful. Salman Khan and his friend were brilliant shooters. They were used by the home minister to kill his rivals. At that time Salman Khan was fired by his friend, he drowned in water and lost his memory. He was associated with Sushmita Sen in the first part of the film.

In the second part Salman Khan was saved by some strangers who lost their child in war. So they accepted Salman Khan as their son. Dia Mirza used to visit the family and in that way got emotionally attached with Salman Khan. The music in the film became extremely successful with Sonu Nigam’s title song “tumko na bhool payenge” becoming super hit. Dia Mirza’s performance was appreciated along with the performance of Sushmita Sen.

She got a memorable role in the film Parineeta. Although the role was not as prominent as that of Vidya Balan or Raima Sen, as it was based on novel of Sarat Chandra Chatterji and directed by Pradeep Sarkar, each and every character role was remembered by cinematic audience.

But her performances in films like Dus or Dum did not create a lasting impression with which she could have grabbed leading roles in future. She again impressed the viewers with her decent performance in the film Lage Raho Munnabhai.

She played the role of the daughter of Boman Irani, who showed a forged horoscope to Kulbhushan Kharbanda to get Dia Mirza married to his son. In reality she was a manglik, and people had reservations in marrying such girls. Sanjay Dutt after understanding the path of Mahatma Gandhi told Dia Mirza to disclose the reality. She said it and although Kulbhushan Kharbanda declined to get his son married to Dia Mirza, Abhishek Bacchan, his son married Dia Mirza as the truth shook his conscience.

She was impressive in her role in Shootout at Lokhandwala. But her appearance in films like Fight Club – Members only, or Cash did not impress the viewers to that extent. Her looks reflect the decency of urbanized young girls of good families. Whenever she had tried to play ultra-modern roles it did not pay her to that extent. Roles which suit Esha Deol or Shamita Shetty does not necessarily suit Dia Mirza.

She is presently working for the film Kabhi Bhi Kahin Bhi. The viewers feel that she has to be more choosy in selecting roles in future to stay in the race where Katrina Kaif, Priyanka Chopra, Kareena Kapoor, Aishwarya Rai had crossed some distance. Dia Mirza has lot of skills and has the capability of reaching the summit in bollywood films.
Posted by Souvik-indrajalik at 8:31 AM

In Lage Raho Munnabhai Vidya Balan was the leading actress who acted opposite Sanjay Dutt but Diya Mirza played the role of the daughter of Boman Irani and her performance in the role of a manglik girl was very impressive.
Souvik Chatterji.