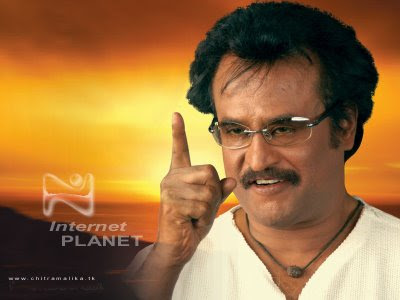 The viewers of bollywood films wish happy birthday to Rajnikant on 12th December, 2010. For the last 20 years he had remained as one of the most popular superstars of South Indian films and carried his stardom in bollywood films as well.

From the beginning of his career he had created an identity in action films. He had his own mannerisms which were liked by South Indian audience and was also new for bollywood viewers. In the film Andha Kanoon, he acted along with Big B. His parents were tortured and killed in the film by Pran, Prem Chopra and Danny. The entire film was related to the revenge that he had taken against all those actors. His sister’s role was played by Hema Malini who was a police-officer in the film. There were romantic sequences in the film as well where Rina Roy contributed opposite Rajnikant, but as the action sequences became predominating there was not much scope for the romantic performance. The film became superhit in the early 80s.

Rajnikant showed his skills in action films along with Kamal Hassan and Big B in the film Geraftar. There he played the role of a friend of Big B, who was killed during an encounter with the villains in the film. The action sequences in the film became famous during mid-80s. Also the music of Bappi Lahiri became popular.

During the mid-80s Rajnikant acted in the superhit film Chaalbaaz which was made in the same line as Ram Aur Shyam and Seeta Aur Geeta. In the earlier films the double roles played by Dilip Kumar and Hema Malini amused the viewers. In Chaalbaaz the double role was played by Sri Devi. Rajnikant and Sunny Deol were the two heroes in the film. As the film was based on comedy of errors Rajnikant used his comedy skills to perfection opposite Sri Devi. Also Anupam kher did an experiment in the negative role in the film.

Rajnikant had been one of the most popular icons of tamil films for generations and had carried forward the legacy that was created by Shivaji Ganeshan, Jemini Ganeshan and others. The list of his hit films are too long and cannot be highlighted in a small article. Even his latest that was released last year titled Shivaji had become super hit. He also played a very active role in South Indian politics. He campaigned for the political party Dravida Munetra Khazagham (DMK) under the leadership of M. Karunanidhi.

Filmstars in South India are hailed across all the four states Kerala, Karnataka, Tamil Nadu and Andhra Pradesh as the languages Tamil, Telegu, Kannada and Malayalam are very close to each other. Rajnikant had remained popular for more than 25 years and the people at large could identify themselves in the diversified characters that Rajnikant had played during his long career. If anyone travels to tourist spots of Tamil Nadu, namely Ooty or Kodaikanal, they will see the huge hoardings and cut outs of Rajnikant, all across the roads. For the tamil people he is like God.

Whenever the list of South Indian filmstars who had glorified bollywood films comes into question the name of Rajnikant comes at the top along with Kamal Hassan, Chiranjeevi, Nagarjuna, Arvind Swami and others. The All India audience expect Rajnikant to continue his excellent work both in South Indian films as well as bollywood films in the years to come.
Posted by Souvik-indrajalik at 8:29 AM

Email ThisBlogThis!Share to TwitterShare to FacebookShare to Pinterest
Labels: Rajnikant