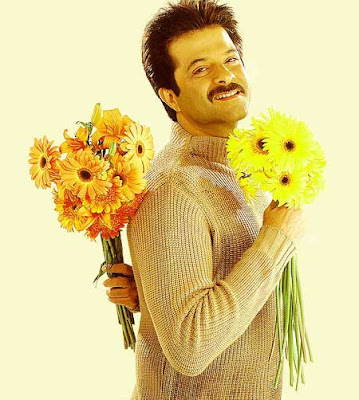 Anil Kapoor appeared in the Zee TV Saregamapa program a week back. In that program he had shared a number of information which the viewers never knew. He said that Vidhu Vinod Chopra never wanted to work with commercial actors and composers when he made the film Parinda. It was Anil Kapoor who insisted him to take Jackie Shroff in the film. He did so. He also recommended the name of RD Burman as composer.

He also told the story relating to the recording of the song “ek ladki ko dekha to aisa laga” in the film 1942 a love story. Firstly Anil Kapoor never wanted to play the romantic role. Instead he asked Amir Khan to do it. When he did not agree Anil Kapoor accepted the challenge. He reduced his weight and appeared before Vidhu Vinod Chopra, and the entire unit was shocked to see Anil Kapoor. The day when the recording of the song took place, Kumar Shanu came with a beard. Anil Kapoor asked him to go and shave and return back and then the song was recorded. The rest was history.

He also talked about the secret relating to his health. The composers Sajid Wajid and others said that heroes who had started their career with Anil Kapoor had half got bald, the rest had left films. Anil Kapoor had still remained hero and looked forward to his new release No Problem. He said he dreamt large. He also said that he had taken everything positively in life. That was the key to his success.

He also remembered brilliant dancer and his best pair Madhuri Dixit. The composers asked him that always he feared his wife in films like No Entry and No Problem. He said that his love towards comedy films had allowed him to do the roles with ease. Everyone had wished the best for his newly produced film No Problem.
Posted by Souvik Chatterji at 9:01 PM