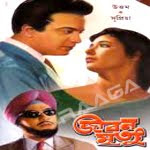 Uttam Kumar was amazing in the film Jibon Mrityu. The film had been released in 1967. It was directed by Hiren Nag, who learned direction from renowned director Ajoy Kar.

In Jibon Mrityu, Uttam Kumar played the role of Ashok Mukherjee, who was branch manager Citizen’s Bank. He established himself after his father died, and was brought up by mother Aparna Debi. He loved Supriya Debi, who was the daughter of Prashad Mukherjee. Her father’s business was in doldrums and he appointed N. Biswanathan as legal advisor to address his debts. But the debts grew, and he died out of frustration.

Uttam Kumar was all-rounder during his college days. Besides being brilliant, he was great singer, and he gave able lips in Manna Dey’s song “kono katha na bole” composed by Gopen Mullick. His friend Tarun Kumar relied on him to pass the examination. He loved Subrata Chatterji who never married him.

Uttam Kumar rose to fame. His office-mates conspired against him, namely Dipak Mukherjee, Prashanto Kumar and Bankim Ghosh. Dipak Mukherjee, made a duplicate key of the Bank’s locker, he stole all the money and shared it with Bankim Ghosh and Prashanto Kumar. Uttam Kumar was charged for stealing the money from the bank and sentenced to 7 years imprisonment. N. Biswanathan was provided money to prevent him from taking the brief of Uttam Kumar.

His mother died after Uttam Kumar went to jail. After coming out of prison, he went to forest of Ratangarh to find Tarun Kumar. But he was transferred. He stayed in the house of Kamal Mitra. He prevented the nephews of Kamal Mitra from stealing his will, so Kamal Mitra provided him money to take revenge against the conspirators.

Uttam Kumar came back to Kolkata in the new name of Santaprasad Singh, wearing a Punjabi Turban. He advised Bankim Ghosh to open liquor business in addition to rice business. He gave money after mortgaging the rice mill. Bankim Ghosh was caught by the police and imprisoned.

He asked Prashanto Kumar to burn his factory to stop trade union demands and get insurance money. The trade union leader was advised by Uttam Kumar to surrender before the police to prove innocence. Prashanto Kumar was also arrested. He ruined Dipak Mukherjee and N. Biswanathan by instigating to buy shares in bogus company, which failed and they suffered huge financial services.

Uttam Kumar proved once again in Jibon Mrityu that he was one-man industry. The film was remade in hindi with the title Jiban Mrityu where Dharmender played the role of Uttam Kumar.
Posted by Souvik Chatterji at 9:18 AM