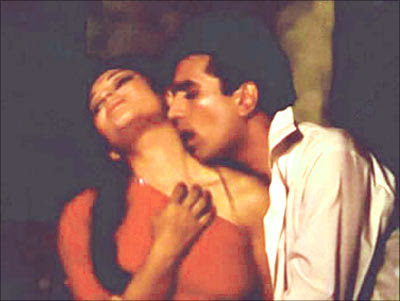 Although he started his career with films like Akhri Khat, Raaz, etc., in the late 60s, he got recognition with Shakti Shamanta’s super hit film Aradhana which was released in 1969. In the 70s, Rajesh Khanna had a dream run with films of different directors including Hrishikesh Mukherjee, Asit Sen, Shakti Samanta and others.

Most of his films from 1971 to 1973, were super hit. And the music of these films created history. The songs of the film Anand, composed by Salil Choudhury were super hit, including “kahin door jab din dhal jaye”, “maine tere liye hi saat rang” sung by Mukesh and “zindagi kaisi hai peheli” sung by Manna Dey. The songs of the film Aan Milo Sajna composed by LP became super hit including Rafi’s song “aan milo sajna” and Kishore’s song “accha to hum chalte hai”.

Rajesh Khanna created a romantic image and his films opposite various actresses like Sharmila Tagore in films like Aradhana, Amar Prem, Mumtaz in Aap Ki Kasam, Asha Parekh in Kati Patang, Aan Milo Sajna, Tanuja in Mere Jeevan Saathi, Hema Malini in Mehbooba, and others created an era of romantic films. He became a role model for the younger generation.

But from the time Amitabh Bacchan entered the film arena he not only dethroned Rajesh Khanna but more than that changed the dimension of bollywood films. He played anti-establishment characters and persuaded other superstars like Vinod Khanna, Shatrughun Sinha, Dharmender, Firoz Khan, Sunil Dutt and others to play similar type of roles.

Rajesh Khanna’s wife Dimple Kapadia established herself into one of the most powerful actresses of bollywood films with success in Saagar, Jaanbaaz, Rudaali, Lekin, Krantiveer, etc.

Even then Rajesh Khanna continued acting for another 20 years and is even seen in a recent film in a role of an old person. Even Rishi Kapoor did cast him in his directorial venture title A ab laut chale. He had received filmfare best actor award a number of times and also received lifetime achievement award.

The viewers expect Rajesh Khanna to contribute in character roles the way Big B, Vinod Khanna and other veteran actors have done over the years.
Posted by Souvik Chatterji at 4:58 PM

A very very happy birthday to the super star Rajesh Khanna, a living legend in himself!!!!

A ver very happy birthday to the super star Rajesh Khanna, a living legend in himself!!!!

Dear Shobhitaji,
Thanks for your comments.
Souvik Chatterji.