Chabi Biswas was unparallel in the film Dadathakur. 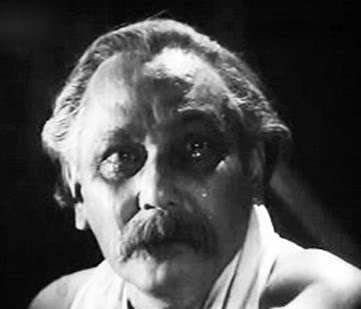 Chabi Biswas was unparallel in the film Dadathakur.

Legendary actor Chabi Biswas was unparallel in the film Dadathakur. The film was directed by director Sudhir Mukherjee. It was based on the real life of stalwart personality Sharat Pandit.

Chabi Biswas who played the role of Sharat Pandit, who was popularly known as Dadathakur, created his own press during the colonial period. He was known for his wisdom and thought provoking literature. In every piece of literature he tried to make the readers laugh.

Tarun Kumar, a known swadeshi during British Raj took shelter in the house of Chabi Biswas. His wife played by Chaya Debi did not prevent it. Chabi Biswas helped the neighbours. He tried to get Sulata Choudhury married to a neighbouring zamindar played by Biswajeet Chatterji. During a procession when the swadeshis tried to put the Indian flag in place, the British police fired at the Indians and Biswajeet got killed.

Chabi Biswas believed in his own capability and never accepted any gift from the Britishers. When he went to buy the tools relating to his Press machine, he was offered the machine without any monetary consideration but Chabi Biswas bought it by paying money. Once he took contract to print question papers of a nearby high school. He went to give the question papers by travelling in train for the next 8 miles. But during monsoon, the railway track got submerged in water, and Chabi Biswas walked down the railway track to reach the question paper to the high school.

He even sold his own written work in the streets of Kolkata like a hawker. Netaji Subhash Chandra Bose saw him doing it, and being the mayor of Kolkata Corporation, he gave a hawking license to Chabi Biswas. It was a very difficult role to play as Dadathakur had been considered as one of the great intellectuals that graced Bengali soil during the freedom movement. But Chabi Biswas with his asthma, did a brilliant job and tried to depict the character of the maestro in his own way and got awarded also. The film should be preserved for its historical value.
Posted by Souvik Chatterji at 1:26 PM

Chabi Biswas transformed himself to play the role of a simple man with high thinking in the role of Dadathakur. Viewers were amazed to see him change the image of an industrialist or feudal lord for playing the role of the maestro.
Souvik Chatterji.