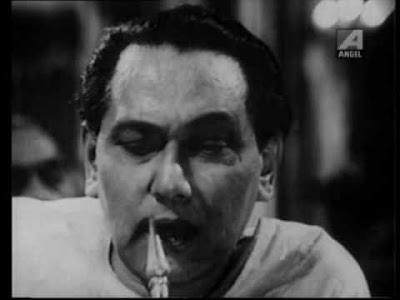 Legendary actor Chabi Biswas was unparallel and sublime in the film Maya Mrigo. The film was directed by renowned director Chitta Basu in 1960. The film was based on the classic literature of Niharranjan Gupta. The writer always had glorified the character of mother in his literature. He had been prominent for his epic literature “Ulka” which was successful as play in Kolkata and also used in the bollywood film Meri Surat Teri Ankhen.

During second world war, Bikash Roy lost his limbs and Sandhya Rani lost all their children. Being helpless she came to Kolkata in the house of Chabi Biswas who had given shelter to a number of tenants including Uttam Kumar, Tarun Kumar, Tulsi Chakaravarty, Jahar Roy and others.

Sunanda Debi never greeted Sandhya Rani well, as she feared that if Biswajeet Chatterji came to know that he was the son of Bikash Roy and Sandha Rani, it would have been fatal for her. Bikash Roy died in the film. At the end of the film the truth was unfolded, but Chabi Biswas explained to everyone that both Sunanda Debi and Sandhya Rani, were accepted as the mother of Biswajeet, as one gave birth while the other brought up the child.

Manobendra Mukherjee composed excellent music in the film with hit songs like “bidhi re” and “metidiamericar kabyo” sung by him, “ore shon shon gerobaj” sung by Hemanta Mukherjee, and “bok bok bok bokum bokum paira” sung by Sandhya Mukherjee. But Chabi Biswas’s brilliant personality had overshadowed all the other performances in the film. He showed a contrast of expressions, including the kindness shown to Sandhya Rani and also the strictness shown to his tenants. The film should be restored for the brilliant performance of Chabi Biswas and also classic literature of Niharranjan Gupta.
Posted by Souvik Chatterji at 8:30 PM