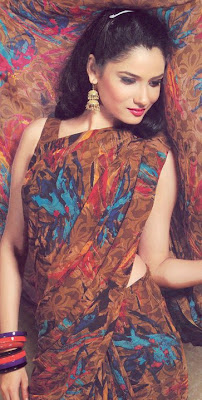 Happy birthday to gorgeous Ankita Lokhunde of Pavitra Rishta. The viewers express their best wishes on happy birthday of gorgeous actress Ankita Lokhunde of Pavitra Rishta. The actress who is as popular as the leading stars of bollywood in India at this moment is Archana (the character played in TV serial Pavitra Rishta). Her actual name is Ankita Lokhunde. She had recently competed against other celebrities in dance competition in TV Channel, where Madhuri Dixit, Malaika Arora and others were judges. She had poured in scintillating performances one after the other. She also came in Zee TV Saregamapa contest to cheer up the competitors before the judges Sajid Wajid, Vishal Shekhar, Daler Mehendi and others. Ankita Lokhunde had projected the character of Maharashtrian middle –aged girl from a middle-class family who had helped her parents before marriage. Due to differences created by her mother – in- law Usha Nadkarni in the serial her marriage resulted in divorce. Her first husband popularly known as Manav Deshmukh, (Sushant Singh Rajput) worked in a garage. But his nature of helping all his family members and members of in-laws’ family created attention for the viewers. He promised to marry Pooja Pihal who played the character Shravani who got pregnant with his brother’s child and his brother died in an accident. The serial Pavitra Rishta played in Zee TV had completed 400 episodes successfully. It had been produced by Ekta Kapoor and Shobha Kapoor. All the actors and actresses in the serial had performed consistently over the last 1 year. That had been the success story behind the serial running for a long time. The serial had impressed middle-class Indians who watch Ankita Lokhunde everyday at 9 pm in Zee TV. Both Ankita Lokhunde and Sushant Singh Rajput had won best Jodi (pair) awards and is considered the most popular performers in TV serials. Both Ankita Lokhunde and Sushant Singh Rajput are good dancers too and they performed in dance competitions in the small screen. The viewers are expecting Ankita Lokhunde to make a breakthrough in Indian cinema from small screen. With her poetic eyes, fair complexion, elegant smile, she has screen presence to suit many lead roles in popular films. Viewers provide their best wishes for Ankita Lokhunde to do well in future.
Posted by Souvik Chatterji at 11:23 AM