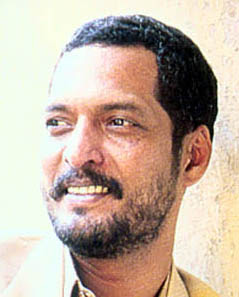 The viewers of bollywood films wish happy birthday to actor Nana Patekar on 1st January, 2010. He created a different style of acting which had no similarity with the commercial actors like Shahrukh Khan or art film actors like Naseeruddin Shah. After Naseeruddin Shah and Om Puri, he was probably the other actor who allowed the directors to do any experiment with him. He drew the attention of viewers all across the country with his strong performance in the film Prahar in the late 80s.

He not only acted in the film but also directed the film. The film was related to the story of a young boy whose mother was dragged into unlawful activities. He learned took military training and provided guidance to new students who joined the armed forces in India. The training schedule was very hectic and the strictness of Nana Patekar appealed to the masses.

After the training was over, one of his students who lost his legs while facing terrorists was killed by the underworld group. Nana Patekar came to Bombay, and took revenge against all of them. He was given shelter by Dimple Kapadia, who was the sister of Madhuri Dixit, the wife of Nana’s student.

The civilians in the area did not like the intervention of military personnel in the area. After Nana killed all the underworld members, he was tried in a court. The court ordered him to be sent to a mental asylum as he started taking the responsibilities of all the other civilians. The film had a strong social message and was admired by the intellectual viewers.

Nana Patekar stormed bollywood films with strong performance in the film Krantiveer. The film showed the use of common people by political leaders for creating riots and clashes between different communities. Nana Patekar killed most of them and supported the effort of Dimple Kapadia who played the role of a daring journalist. If his reserve personality in the film Prahar was appreciated, his aggressive acting in the film Krantiveer amused the viewers.

He also acted in comedy roles in films like Raju Ban Gaye Gentleman with Shahrukh Khan and Juhi Chawla. He was also sublime in the film Yashwant with Madhu. His uprightness caused trouble for his wife and friends.

He was also sublime in a muslim role in the film Ghulam-i-mustafa. He played the role of an underworld person who worked for the cause of a political leader played by Paresh Rawal. His wife Ravina Tandon was killed in the process. He then helped a South Indian family led by Aruna Irani, and stayed in her house to prevent the rival groups from creating any trouble against the family. The film had a strong message of national integration.

Nana Patekar also did a fantastic job in the film Hum Dono with Rishi Kapoor. He balanced the romantic acting of Rishi Kapoor opposite Pooja Bhatt with his witty performance and strong action. He did well opposite Big B and Tabu in the film Kohram.

Whenever people saw films like Ab Taak Chappan or Vadh, they had appreciated his strong personality which has always raised voice against the evil practices in the country. His negative acting in films like Parinda opposite Anil Kapoor and Jackie Shroff was also appreciated.

Nana Patekar was brilliant with Akshay Kumar and Anil Kapoor in the film Welcome. His role of mafia don amazed the viewers whose sister Katrina Kaif, who wanted to marry Akshay Kumar. But Akshay Kumar’s uncle Paresh Rawal never wanted Akshay to marry Katrina, due to Nana Patekar’s involvement in underworld activities.

The viewers expect him to continue the good work and show more dynamism in commercial and art films in future.
Posted by Souvik Chatterji at 5:22 PM