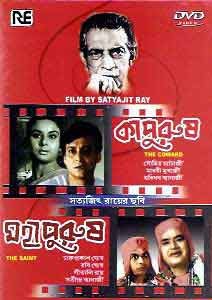 Mahapurush was made along with Kapurush by Ray in the year 1965. While Kapurush did not reach the audience, Mahapurush amazed the viewers. Raj Shekhar Basu’s literature was titled Birinchibaba. Charu Prakash Ghosh played the role Birinchibaba in the film Mahapurush.

Charu Prakash Ghosh along with his assistant played by Robi Ghosh convinced Prasad Mukherjee that Charu Prakash Ghosh was God’s messenger. Both resided in Prashad Mukherjee’s house. Satindra Bhattacharya had affair with Mitali Roy. When he saw that Mitali Roy started avoiding her due to the presence of the Sadhu, he communicated about the Sadhu before his friends, Satya Banerjee, and others.

Many God fearing people in Kolkata used to visit Charu Prakash Ghosh and listen to his words. He disclosed a lot of informations about Plato, Gautam Buddha, etc. He mentioned that there is no present. Past and future existed. One of the friends of Satindra Bhattacharya, communicated with Santosh Dutta, a famous scientist in Kolkata, to know the formula for producing smoke in the house.

Very significantly the satire and wit of Raj Shekhar Basu, was captured by Satyajit Ray in the film. The film did great business and the message reached the masses. The film should be preserved.
Posted by Souvik Chatterji at 6:28 PM