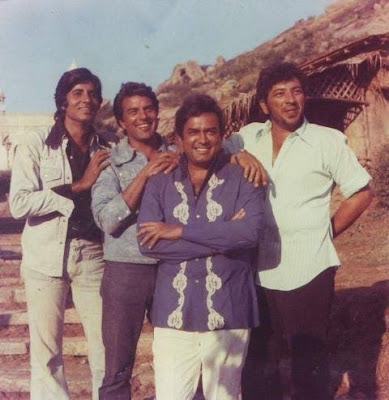 The viewers of bollywood films wish happy birthday to Dharmender on 8th December, 2009. He is one of the living legends of bollywood.

He played a different innings in the 70s. His image of action hero created revolution in bollywood films. He had a very muscular physic and created a trend of actors who involved themselves in exercises. His discipline had been followed by the actors of the next generation like Sunny Deol, Sanjay Dutt, Salman Khan, Hrithik Roshan and others. His successful films in the 70s included Jheel Ke Us Paar, Jugnu, Sholay, Dream Girl, etc.

His combination with Hema Malini is considered as one of the most colourful onscreen combination after Raj Kapoor Nargis and Dilip Kumar Vaijayantimala. Dharmender had acted in more than 20 films with Hema Malini, most of which were super hit. The most renowned films included Raja Jani, Naya Zamana, Sholay, Charas, Seeta Aur Geeta, Burning Train, Dream Girl, etc.

Dharmender acted in off-beat films as well. The best example was Gulzar’s Kinara. He was the husband of Hema Malini in the film who was a noted classical dancer. He was killed due to an accident with the car of Jeetender in the film. Bhupinder Singh’s song picturised on Dharmender titled “ek hi khwab kai baar dekha hai maine” remains as one of the greatest off-beat creations of RD Burman. His performance in the film Maa, based on the life of elephant requires special mention. He took a young elephant away from his mother to use him in Circus. The mother elephant revolted and killed Dharmender’s mother Nirupa Roy in the film. Dharmender’s patent dialogue “maa kasam”, “kamine”, etc., were memorized by youths of the 70s.
Both his sons Sunny Deol and Bobby Deol are successful actors of bollywood films. Dharmender still has acting left in him and the viewers expect him to carry on the marathon innings that he had started 50 years back.
Posted by Souvik Chatterji at 10:02 AM