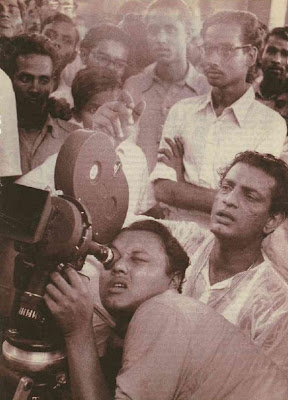 Sandip Ray had given an interview in Bengali Newspaper Anandabazar Patrika on 31st July, 2011. He mentioned that when he was young he loved to go for outdoor shooting with his father Satyajit Ray.

He travelled during his holidays because he had school at other times. He loved the experience of going to Darjeeling when Satyajit Ray shot the film Kanchenjungha in 1962. He loved the shooting in respect of Gupi Gayeen Bagha Bayeen in 1969. Halla’ s king’s palace was shot in Sonar Kella, Jaisalmer.

Sandip Ray said that his father Satyajit Ray loved Rajasthan the most in terms of outdoor shooting. Ray in fact made Jaisalmer prominent, after shooting the film Sonar Kella in 1974, over there. Otherwise people knew Jaipur in more details than other parts of Rajasthan.

Among character actors Sandip Ray admired Chabi Biswas, Tulsi Chakravarty, Jahar Roy and others, who acted in Satyajit Ray’s films. He had started his career with the film Phatik Chand. Many portions of the film was shot near Shahid Minar in Kolkata. At that time a lot of jugglers showed many games in fairs held near Shahid Minar in Kolkata. The film took two years to get released. He said he was not fond of fish in diet, but liked Luchi Begunbhaja and khichuri.

Sandip Ray said that he was satisfied with the work in the film Nishijapon. Recently he had shot for the Feluda Series Detective Film Royal Bengal Rahasya. It was shot in Orissa, North Bengal and other places.
The viewers expect that Sandip Ray will continue making great films with the detective stories of legend of legends Satyajit Ray.

Posted by Souvik-indrajalik at 9:13 PM