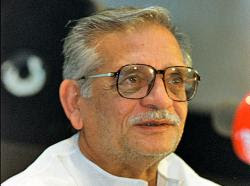 The viewers of bollywood films wish happy birthday to legendary director and lyricist Gulzar on 18th August, 2011. He had been one of the greatest living legends at this moment. Bollywood is indebted to thoughtful director who had converted filmmaking into work of art.

His film Mausam released in 1975, was based on reflections of mind. Sanjeev Kumar was attached with Sharmila Tagore living in Darjeeling when he came over there as a student. After he went abroad to pursue his post-graduate studies, Sharmila was exploited and her daughter how looked identical like her mother was compelled to join prostitution.

Sanjeev Kumar returned as a foreign-return doctor and took his daughter away from the surroundings and gave her a new life. Bhupinder Singh’s ghazal “dil dhoonta hai phir wohi” composed by Madan Mohan and written by Gulzar remains as the greatest ghazal created in the 70s. The story-telling in the film was appreciated by critics.

Gulzar created a different dimension by experimented with classic literature during the 70s and 80s. His films Aandhi released in 1975, with Suchitra Sen and Sanjeev Kumar and Kinara released in 1978, with Jeetender and Hema Malini can very well be classified as master pieces. He gave very meaningful sequences where songs were recorded. He created a separate fanclub for himself who could understand human relations at the same period when larger than life images were created in main stream cinema of Big B, Vinod Khanna, Shatrughun Sinha and other angry young men in films like Sholay, Kalicharan, Burning Train, etc.

Gulzar’s films created for children like Parichay and Kitaab are still considered masterpieces. He was impressed by the thoughts of Hollywood film Sound of Music and Uttam Kumar’s Joyjoyanti to make a film related to five children who required a good teacher. Jeetender treated them with compassion and brought change in the children. In Kitaab, Uttam Kumar cared for his brother-in-law Master Raju who was a small child and had been send by her mother to get educated in urbanized background.

Gulzar experimented with so many diverse subjects that articles after articles can be devoted to his different themes, including the film Koshish, based on life of deaf and dumb, Lekin, based on folklore of Rajasthan. Koshish had a very strong social message. It showed that deaf and dumb persons could go to dead and dumb schools and learn sign language. Their life can have a new aspiration and direction. All his artists like Suchitra Sen, Jaya Bacchan, Sharmila Tagore, Uttam Kumar, Sanjeev Kumar, Jeetender portrayed the life of middle-class men who were found in everyday life. He even worked with subjects like terrorism in films like Machis.

His composers, Jaidev, Madan Mohan, Khayyam, RD Burman all had given their best music for the thoughtful director. These days Gulzar concentrates more on writing lyrics. In that field too he had been master of masters. In the recent past Gulzar said that he wanted to devote time to write books. For those reasons he had reduced directing films in the last 10 years. It is a huge loss for thoughtful viewers. He continued to write lyrics of songs in bollywood films in regular intervals and his popular lyrics like “aisi nazar se” in the film Bunty Aur Babli had both class and also rythm.

His admirers expect him to continue to make rich films which make the audience think, feel and reflect on the happiness and sniffles of life.

Posted by Souvik-indrajalik at 8:25 AM