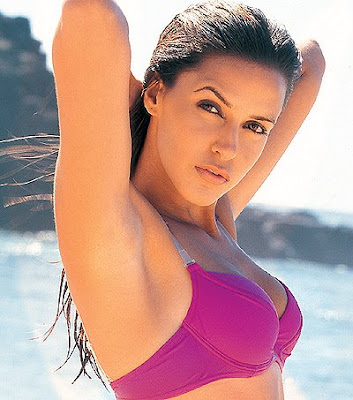 The viewers of bollywood films wish happy birthday to Neha Dhupia on 27th August, 2011. Neha Dhupia, the daughter of Commander Pradip Dhupia of Indian Navy, had attracted public attention after winning the Miss India Universe 2002 crown in that year. After beginning her career in the film Qayamat: City Under Threat, she impressed the viewers with challenging role in the film Julie where her glamour was used to perfection.

But she got a notable role in the film Kya Cool Hai Hum in 2005. She acted opposite Ritesh Deshmukh where Tusshar Kapoor and Isha Koppikar were the other pair. Isha Koppikar, the police officer in the film was sent by Anupam Kher to investigate a case relating to a habitual offender. Tusshar Kapoor was suspected to be a murderer and Isha Koppikar was sent to his house to monitor his activities. Ritesh Deshmukh had an affair with Neha Dhupia and married her at the end of the film. The film was serio-comic in nature and Neha Dhupia performed very well in her respective role.

She also got a purposeful role in the film Shootout At Lokhandwala. The film was related to a real-life story where the Bombay police had trapped the underworld group in a house in Bombay and fired at them. Sanjay Dutt gave a memorable performance in the role of Encounter specialist in the film opposite Vivek Oberoi who played the role of a mafia don. Neha Dhupia did her part very well.

She was even impressive in her supporting role in the film Singh is Kinng, where Katrina Kaif and Akshay Kumar had the lead roles. Singh is Kinng also did good business in India and abroad.

But if her performance in the earlier films like Sheesha and new films like Mithya are compared it will be found that initially the stylish screen presence and bold performance of Neha Dhupia was publicized by the producers.

These days the acting skills of Neha Dhupia are used. She had been bold enough to act in the role of a prostitude in the film De Dana Dan in 2008. The role required comedy timing and she did extremely well.

In 2009, her performance in the film Raat Gayi Baat Gayi bagged her the nomination for Star Screen Award for the best actress in a supporting role. She had two releases in 2010 where her two films, Action Replay and With Love to Obama had different roles. Although her performance in the films were appreciated the films did not do good business. Unless she grabs any glamourous role in near future she will not remain in the rat race where the competition between Priyanka Chopra, Katrina Kaif, Kareena Kapoor, Sonakshi Sinha is very keen.

Posted by Souvik-indrajalik at 11:31 AM