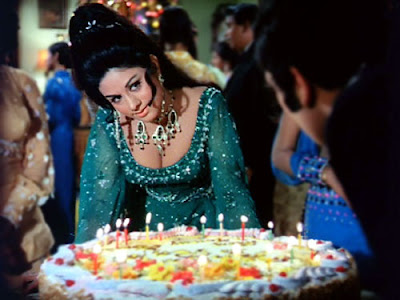 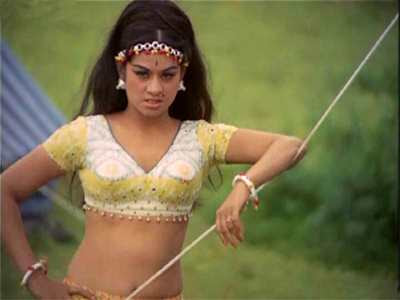 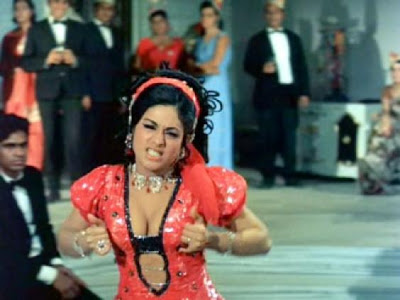 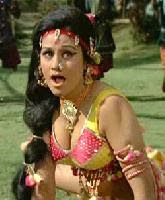 The viewers of bollywood films wish happy birthday to dancing legend Aruna Irani on 18th August, 2011. She had made her debut as a child actress in the film Ganga Jamuna in 1961. She played the role of the smaller version of Azra in the film. She played similar roles in films like Jahanara in 60s.

But her fantastic dancing skills launched her in super hit films like Farz which was released in 1967. She danced opposite Jeetender in the film Farz in Rafi’s song “mast baharon ka mai aashiq”, and that cemented her career in bollywood films. After that she got dance-based roles one after the other in bollywood. But due to comedy pairing with Mehmood in films like Humjoli, she got roles in the range of vamps rather than frontline heroines. She was brilliant opposite Mehmood in the Jeetender starrer Waarish in 1968. The music of RD Burman was brilliant with Rafi’s hit songs like “ek bechara pyar ka maara”.

She amazed the viewers with the role of a gypsey woman in Jeetender’s film Carwan released in 1971. Her dance number in the song “dilbar” sung by Lata Mangeshkar and “chadti jawani” sung by Mohammad Rafi had shaken up bollywood in the early 70s. Her dancing skills were used to perfection by Showman Raj Kapoor in the film Bobby especially in Shailendra Singh’s song “mai shayar to nahin”.

Her successful films in 70s and 80s includes Khel Khel Me, Buddha Mil Gaya, Laila Majnu, Ek Nari Ek Brahmchari, Qurbani, Sargam, Rocky, Love Story, etc. In negative characters in films like Qurbani she had amazed the viewers. From late 80s, she switched to character roles and became one of the leading actresses in that field. She received filmfare award for the best supporting actress for her brilliant performance in Madhuri Dixit’s film Beta.

Her brilliant performance in films like Raja Babu, Ghulam-e-Mustafa, Kartavya, had created a separate place in the hearts of millions of filmlovers. Viewers got astonished to realize how an able dancer in her teenage, had transformed into a brilliant character artist who could do any type of role starting from comedy acting to serious roles to roles of negatives characters.

She should have won many more filmfare awards for epic performances in films like Bobby, Qurbani, Haseena Maan Jayegi. She also played notable role in Priyadarshan’s film Khatta Meetha released in 2010. The viewers expect the veteran of more than 300 films to continue the great work that she started 40 years ago.

Posted by Souvik-indrajalik at 2:36 PM