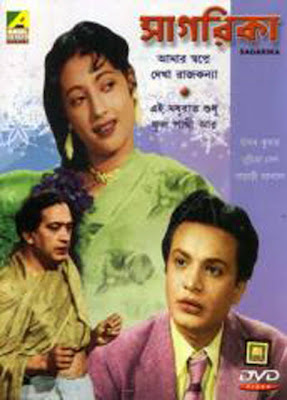 In the 50s and 60s, in the list of eminent Bengali directors who had directed refined commercial films other than Ajoy Kar, Agradoot, the team of Agragami was the most prominent team of directors, led by the eminent personality Saroj Dey.
Saroj Dey was born in 1921. In 1956, Agragami directed Uttam Kumar Suchitra Sen’s super hit film Sagarika. The film again bolstered the bond of composer Robin Chatterjee, singer Sandhya Mukherjee and actress Suchitra Sen. All the songs in the film became super hit including Sandhya Mukherjee’s “sei to amar prothomo faguno bela”, “Alpona Banerjee’s “hridoy amar sundoro tobo paye”, Shyamal Mitra’s “amar sopne dekha rajkonya thake”, to name a few. In the same year, Agragami’s film Shilpi did excellent business. Uttam Kumar and Suchita Sen were outstanding in the film and the character artists Kamal Mitra, Asit Boron, and others amazed the viewers. Robin Chatterjee’s music was excellent with Dhananjoy Bhattacharya’s song “bondhu re” mesmerizing the audience.

After making successful films like Kanna, Nishithe in the mid-60s, Agragami again astonished the viewers with Uttam Kumar’s successful film Shankhabela. In the film the progress and decline of a high-earning personality played by Uttam Kumar was projected. His over-drinking habit led to separation with his wife Madhabi Mukherjee who lived with her small son alone. When the son fell ill, Bosonto Choudhury, the great doctor in the film treated him. Bosonto Choudhury helped in the re-union of Uttam Kumar with Madhabi Mukherjee over the recovery of their small child. The music of Sudhin Dasgupta was excellent once again with Manna Dey’s hit song “dekechi ke age ke diyeche sara”, “ami agantuk ami barta dilam” and Lata Mangeshkar’s brilliant song ‘aaj mon cheyeche ami hariye jabo”. Agragami’s film Bilombito Loy in 1970, with Uttam Kumar and Supriya Debi was also successful. Composer Nochiketa Ghosh’s music in the film was impressive.

Saroj Dey made the film Koni in the early 80s, in his own name by not using the banner of Agragami. There Soumitra Chatterjee played the role of trainer of swimming who groomed a female swimmer in Bengal. One article is too small to highlight the achievements of eminent director like Agragami. Articles after articles can be devoted to the genius director. His films and works should be preserved.

Posted by Souvik-indrajalik at 8:45 PM