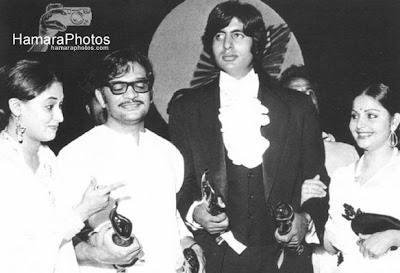 Rakhee acted in many landmark films opposite Big B including Shakti Shamanta’s Bengali film Anusandhan, hindi film Barsaat Ki Ek Raat, Kala Patthar, Kasme Wade, etc. In the early 80s Rakhee played the role of her lifetime opposite Dilip Kumar in the film Shakti. She played the role of the mother of Big B, who faced the hostility between Dilip Kumar and Big B, one being the protector of law, while the other being the lawbreaker. The scenes where she praised her law-abiding husband her performance had outcast Big B, and viewers said that Rakhee’s performance was as brilliant as Dilip Kuma in Shakti. The film became super hit. She was brilliant in the film Shaan. She played the role of the wife of Sunil Dutt. After the death Sunil Dutt, her small interaction with Shashi Kapoor and Amitabh Bacchan, who were the brothers of Sunil Dutt in the film, had shown the class of acting of Rakhee.

Rakhee had also acted in many character roles and challenging roles. Her performance in Aparna Sen’s film Parama requires special mention. She had affair with a middle-aged neighbour. When the truth relating to her extra-marital affair was known to her husband, she lost her value in the family. She showed the helplessness in the respective story. She had performed in both commercial films and parallel cinema and in both forms of films she had kept a mark.

The viewers expect her to continue the good work in the years to come.

Posted by Souvik-indrajalik at 9:00 AM