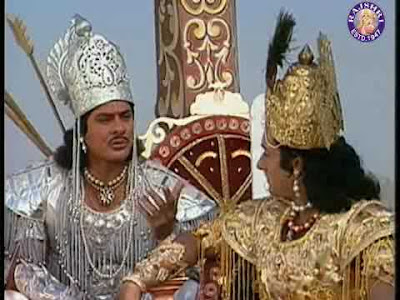 Indians have a separate religious sentiment associated with Lord Krishna, the renowned avatar of God Vishnu. The film Mahabharat made in 1965 is revisited on the eve of Krishna Janmashtami to be celebrated all over India tomorrow on 22nd August, 2011.

The film Mahabharat was directed by director Babulal Mistry in 1965. Actor Abhi Bhattacharya played the celebrated role of Lord Krishna in the film. He had the challenging task of chanting the slokas from Bhagwat Geeta, which moulded Arjun in the battle of Kurukshetra and led to victory of the Pandavas. Very significantly Pradeep Kumar played the epic role of Arjun in the film. When Arjuna saw his own relatives in the other side of the battle, he got perplexed and thought whether to fight the battle or not. Lord Krishna explained to him that he must do his Karma and that too of a Kshatriya. In the entire Mahabharata what Lord Krishna had delivered later became learning texts for Hindus all over the world.

In the late 80s and early 90s, eminent filmmaker BR Chopra made Mahabharata in Doordarshan, and as TV serial had remained extremely successful. Nitish Bharatdwaj played the role of Lord Krishna in the serial. All the episode related to the birth of Lord Krishna flabbergasted the audience. His mama’s role was played by Goga Kapoor. The viewers saw the battle between Lord Krishna and Mama Kanghs was very well depicted by BR Chopra.

Nitish Bharadwaj studied Bhagwat Geeta, very well and his performance in the battlefield of Kurukshetra where he persuaded Arjun to fight the battle had remained matchless. The character of Arjun was played by Feroz Khan. The pandavas were heavily dependent on Lord Krishna in their war against the kauravas. Lord Krishna only asked Bhima to hit Duryodhana on his uru, meaning the thigh, which led to his victory. Lord Krishna asked Arjun to throw his arrow at Karna when his chariot got stuck in mud and he tried to release it. The same Lord Krishna, provided cloth to Draupadi, at a time when Duryodhana asked Dushshashan to take away her clothes.

Lord Krishna is worshipped as God by numerous hindus all across the world, and the effort of filmmakers in reaching the epic related to Lord Krishna had always been considered noble and appreciated. Both the film Mahabharata and the serial Mahabharata should be restored.

Posted by Souvik-indrajalik at 7:55 AM