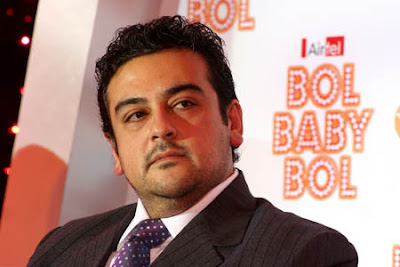 The viewers of bollywood films and the listeners of bollywood music wish happy birthday to singer and composer Adnan Sami on 15th August, 2011. Singer and composer Adnan Sami had glorified Zee TV Saregamapa little Champs Program held every Friday and Saturday in Zee TV channel. He is one of the judges of the program along with the other judges namely Kailash Kher and Javed Ali. They consult with the Mahaguru Alka Yagnik.

On 14th August, 2011, during the show, Alka Yagnik greeted Adnan Sami with a birthday cake, and sang the song “panchi nadiya pawan ke jhoke” from the film Refugee. She meant that India has its independence day on 15th August, while Pakistan has its independence day on 14th August. As Adnan Sami is from Pakistan, due to the insistence of Alka Yagnik, he stayed during his birthday in India as against his wishes of spending it with his wife and family in Pakistan. On the same day Javed Ali showed his sufiana andaz by singing the song “piya haji ali” with the child singers.

Adnan Sami was born in 15th August, 1973. He had shown his exceptional talent in playing the piano and composing experimental songs in Indian films. He was born and brought up in London, UK. He created his first solo album Raag time in 1991-92. Adnan Samy acted in the film Pakistani film Sargam along with his wife Zeba. Then he created the album Kabhi To Nazar Milao with Asha Bhosle, for which he composed the songs himself.

His song “tu sirf mera mehboob” from the film Ek Ajnabee became a big hit in 2001. His next album Tera Chehra was released in 2002, which also became super hit. He worked with composer AR Rehman in the song “aye uri uri” in the film Saathiya in 2002. From that time he never looked back.

He composed music along with Raghav Sachar in Sunil Shetty’s film Daddy Cool in 2010. In the film the song “daddy cool” sung by Raghav Sachar and Paroma Dasgupta became very popular. He sang the landmark song “nor-e-khuda” along with Shankar Mahadevan and Shreya Ghoshal in the film My Name is Khan released in 2010.

He had won many international awards including the Nigar Award, the Bolan Academy Award, the Graduate award, to name a few.

In the Zee TV Saregamapa Little Champs Program his way of guiding the child competitors had amazed the viewers and listeners. His urdu talaffus had been excellent and he had addressed the child participants like Asmat, Salman and others with lot of respect and dignity. All the judges had used their immense talent to guide the children who had sung difficult classically oriented songs brilliantly.

The country expects a lot from the great singer and composers. The viewers expect that Adnan Samy is going to create new dimensions in the field of music in future.

Posted by Souvik-indrajalik at 6:39 PM