Tahir Hussain should be remembered for his works. 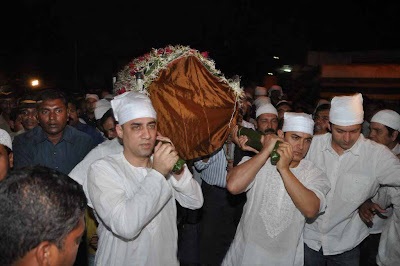 Tahir Hussain should be remembered for his works.

Director Tahir Hussain died on 2nd February, 2010, after having a massive heart attack. He had been known as the brother of notable filmmaker Nasir Hussain and father of Amir Khan.

He was associated with Director Nasir Hussain from the early 60s. He even acted in a small role in the film Jab Pyar Kisi Se Hota Hai released in 1961. Dev Anand and Asha Parekh played the main roles in the film and the music of the film was composed by Shankar Jaikishan. All the songs sung by Rafi and Lata became super hit including “jiya ho, jiya ho jiya kuch bol do”, “yeh ankhe uff yumma”, “sau saal pehele”, “teri zulfonki”, etc.

Tahir Hussain produced the film Anamika in the 70s with Sanjeev Kumar and Jaya Bacchan. Both Sanjeev Kumar and Jaya Bacchan used to be considered the most versatile actor and actress of the 70s. Due to their variations in acting they were generally cast in off-beat films directed by Gulzar, Hrishikesh Mukherjee, etc. But Tahir Hussain used them in a romantic film which did great business.

In the mid-70s, Tahir Hussain switched on to action films. His film Zakhmee with Sunil Dutt and Asha Parekh became super hit. In the same film Rakesh Roshan, Reena Roy and others also were introduced he later on became great stars.

He produced the films Hum Hai Rahi Pyar Ke and Tum Mere Ho where Amir Khan played the lead roles. The films maintained the gharana of Tahir Hussain’s soft romantic stories which charmed the audience. These days his son Amir Khan has a wider popularity than the father as he is appreciated for giving super hit films like Ghajini and 3 idiots. Even then Tahir Hussain should b remembered for his great work and his films should be restored.
Posted by Souvik Chatterji at 2:57 PM