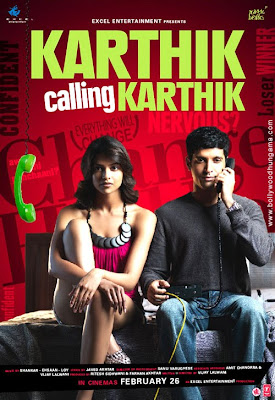 Karthik calling Karthik is the new film directed by Vijay Lalwani and produced by Farhan Akhtar and Ritesh Sidhwani. Whenever the name of Farhan Akhtar is associated with any film, the viewers are reminded about the success of his previous films like Lakshya or Rock On.

The film revolves around the life of an introvert character Karthik played by Farhan Akhtar. He faces a lot of hurdles and obstacles in life due to the fact of hardly opening his mouth whenever required. He also becomes a loner as he keeps in phone also off not to interact with school friends and other friends. He meets another character called Karthik in the film, a person who changes his dimensions.

Deepika Padukone played the role of the friend of Farhan Akhtar in the film who had been considerate and compassionate towards Farhan Akhtar. She almost played the same type of character which was played by Konkona Sen Sharma in the film Luck By Chance or Wake Up Sid. Indian Institute of Management had been used to shoot some of the scenes.

But these films cannot expect to do great business, as the viewers these days cannot identify themselves in slow films. Farhan Akhtar and Deepika Padukone had played their roles in style. The character actors and actresses in the film including Ram Kapoor, Shefali Shah, Sanjay Dutt, Omi Vaidya, were brilliant. The film has every prospect of doing mediocre business as the story is good and performances of actors were very decent.
Posted by Souvik Chatterji at 5:00 PM