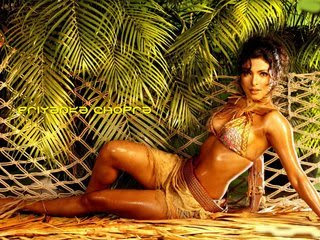 Priyanka Chopra is one of the most promising actresses of the present time. She had shown her capability in performing in different types of roles. She initially acted in small roles in films like Hero opposite Sunny Deol, where the main role was played by Preeti Zinta, but became prominent with passing of time.

She had impressed the viewers with her dynamic performance in the film Don, opposite Shahrukh Khan. She was acting in the role which was originally played by Zeenat Aman in the original Don, played by Amitabh Bacchan and released in 1978. She had to show both her vengeance as she entered the gang of workers working for Don, only to kill him and take revenge for killing her brother. The moment she came to know, that the new Shahrukh Khan was not the original Don, but a dummy used by the police department to arrest all the criminals, she had to show romantic performance. She was sublime in both the parts and adjusted herself to the modern technology that was used in the new Don. The song “aaj ki raat” was very successful. She had done well opposite Hithik Roshan in the film Krishh, which was the 3rd version of the two early films directed by Rakesh Roshan titled Kahona Pyar Hai and Koi Mil Gaya. She showed her dancing capabilities opposite Hrithik Roshan, who was blessed with supernatural power in the film. Her performance along with Hrithik Roshan had contributed in the success of the story which was a fantasy. Priyanka Chopra had done well opposite Salman Khan in the film Salaam-e-isq. She had shown her capability of romantic performance in the film and the film had been successful with hit songs like “salaam-e-isq”. Generally people have the feeling that actresses having background wining awards in beauty contests struggle in bollywood films where they face the test of acting, dancing and other skills. Priyanka Chopra had won prizes in these contests and just like Aishwariya Rai and Lara Dutta had shown that she knows acting and can make major contribution in bollywood films. The viewers expect even better performance in new films in the years to come.


Article By: Supriya Chatterji.
Posted by Souvik Chatterji at 1:51 PM

Priyanka Chopra had made significant contribution in the film Don. She was looking glamourous and gained public sympathy.
Rumi Chatterji.

Priyanka Chopra was a real romantic in the movie Barsaat but in other movies like Andaaz she is not a bit romantic... She is more wild and crazy and least of all not decent at all... I liked her in Barsaat in a decent and romantic role but the song Barsaat was a little indecent but besides that she played well... but in other movies she plays very drastic roles where she is not romantic or decent but in fact overwhelming and not in a good way...