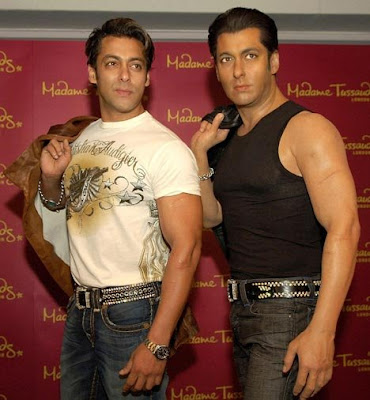 Salman Khan can be considered as one of the most dynamic hero of bollywood who had made major contribution in the last 20 years. He started his career with the film Maine Pyar Kiya in late 80s opposite Bhagyashri and made significant impact on the film lovers. People were looking for new actors at that time and Salman Khan fulfilled their wishes in that film.

In 1991, he made a major contribution in the film Saajan, along with Sanjay Dutt and Madhuri Dixit. The film was based on triangular love story, where Sanjay Dutt was a handicapped poet who had written impressive poetry on Madhuri Dixit. He asked Salman Khan to show himself as the poet so that Madhuri Dixit can get impressed and get a better life partner than a handicapped person. Ultimately the truth was unfolded. The film became successful due to melodious songs being composed by Nadeem Shravan. The prominent songs include “mera dil bhi kitna pagal hai”, “dekha hai pehli baar”, “jiy to jiye kaise”, etc. Salman Kahn had acted in other successful films at that time including Hum Saath Saath Hai, Khamoshi, etc. In Khamoshi, he played the role of a compassionate person who felt for a girl played by Manisha Koirala, who was the only person in the family of deaf and dumb who could speak. The songs in the film including “aaj mai upar, aasma niche” were successful.

In Hum Dil De Chuke Sanam, he played the role of a singer who had come to India from abroad, to learn Indian classical music, and got involved in an affair with the daughter of the music teacher played by Aisharya Rai. The Indian traditional culture depicted in the film with colourful locations in Rajasthan, had contributed for the success of the film. The songs in the film including “aankho ki gustakhiyan”, “dhol baje”, etc., were very successful.

His other successful films include Auzaar, Bibi No. 1, No Entry, etc. He also acted well in the film Jab Pyar Kisi Se Hota Hai, where he played the role of a playboy whose wife died leaving a son, and the son came in the way of marriage of himself with Twinkle Khanna. The son was played by Udit Narayan’s son, and his performance was well appreciated by film lovers. It is very difficult to cover the best films of Salman Khan in a small article, as he had made landmark performance for the last 20 years, but there is no doubt that if films like Salaam- e-isqe, or Partner, are seen, everyon will conclude that he is a crowd puller and that is one of the reasons why his wax statue is made in Madam Tussade’s museum in London after Big B, Aiswariya Rai and Shahrukh Khan.

Article By: Rumi Chatterji.
Posted by Souvik Chatterji at 10:46 AM

Salman Khan had been successful to retain his image for around 20 years unlike a lot of heroes who had performed in popular films but switched over to character roles because the audience did not acept them as heroes.
Rumi Chatterji.

Salman Khan improved his acting over the years. The standard of acting in Tumko Na Bhool Payenge in the recent years shows that he had worked on his acting and these days viewers expect good performance along with his dancinf skills and fighting skills.
Souvik Chatterji.