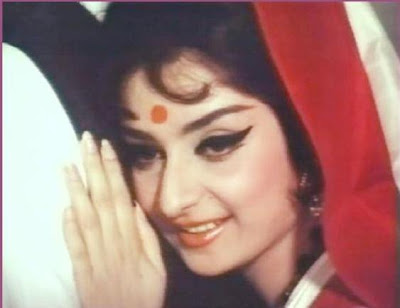 Saira Banu is considered as one of the sweet actresses who had glorified bollywood films during the 60s. She had acted in successful films opposite Shammi Kapoor, Joy Mukherjee, Biswajeet and other leading actors of that age. She started her career with the film Junglee, 1961, opposite Shammi Kapoor where she succeeded in tramsforming the character of Shammi Kapoor, who was arrogant, unmannerly and indecent. The songs in the film composed by Shankar Jaikishan and sung by Rafi and Lata were evergreen hits like “ehsaan tera hoga mujhpar”, “meri yaar shabba khair”, “Kashmir ki kasli hu mai”, etc.

Most of the films of Saira Banu were shot at picturesque locations in India and abroad, and the colour, the music, the camera work all contributed to the success of the films. She acted with Biswajeet in the film April Fool, and Joy Mukherjee in the film Shagird. In Shagird, she was a village girl who was brought up in the hilly regions and I.S. Johar, the teacher fell in love with her, Joy Mukherjee the student of IS ohar, explained to his guru about how to be presentable, and in the process involved in an affair with Saira Banu. The songs composed by LP and sung by Rafi and Lata including “who hair zara khafa khafa”, “bare miya diwane aise na bano”, “hilmil pyar war”, etc, were big hits. Saira Banu acted in series of films with Rajender Kumar including Ai Milan Ki Bela, Jhuk Gaya Aasman, Aman, etc. All the songs in these films were composed by Shankar Jaikishan and were romantic, sweet and had become immortal with passage of time, including “tum khamseen ho”” aha ai Milan ki bela dekho ai”, “o sanam tere ho gaye hum”, “o priya, kaun hai jo sapno me aya”, “surahidaar gardan”, “aaj ki raat”, “kahan chal diye”, etc. Rafi and Lata were at their best and the viewers were impressed with the music, the costumes, the glamour of Saira Banu, the screen presence of Rajender Kumar, the composition of Shankar Jaikishan, and the lyrics of Hasrat Jaipuri and Shailendra.

Saira Banu had acted with Raj Kapoor and Dilip Kumar during that age and all those films ended up being musical blockbusters. Raj Kapoor’s Diwana, in 1967, is known for good performance of Saira Banu and songs like “ei sanam jisne tujhe chaand sa surat di hai”, “diwanma mujhko log kahe”, “ tumhare bhi jai jai”, “taro se pyare”, etc. Her films opposite Dilip Kumar include Gopi, Bairaag, Sagina, where the rural image presented by Dilip Kumar was balanced by the smart image exhibited by Saira Banu. She had also provided brave performance in Manoj Kumar’s Purab aur Paschim, and Sunil Dutt’s Parosan. In Parosan, she feel in love with Sunil Dutt, a next door neighbour, for his outstanding singing skills, but later came to know that all the songs were sung by Kishore Kumar and he had just given lips in the songs. The comedy performance of Mehmood and Kishore Kumar require special mention.

In the mid –70s, she acted in films opposite Amitabh Bacchan in Zameer and other films and faded out of the film arena in the 80s. But whenever the sweet memories of the 60s are recollected, Saira Banu appears in the minds of viewers for her smart, sweet, romantic performances. Hr films should be preserved for their cinematic values.
Posted by Souvik Chatterji at 12:38 PM

Saira Banu had performed both in modern roles and and rural characters. For example in Sagina, she acted as one of the workers who faced the challenges set by the union and saw how they made Dilip Kumar the leader and after exploitation criticised all his activities.She was an asset of bollywood.
Rumi Chatterji

Saira Banu was most beautiful actress full of grace with her natural beauty and long hair - "surhidaar gardan" - she was and will be the most beautiful actress ever. I loved her movies with Rajendra Kumar. Ayee Milan Ki Bela, Junglee, Saaz aur Awaaz, Bluffmaster, Pyar Mohabbat, April Fool - cannot forgot these movies. I do not mind watching it again and again.

Can someone tell me where is Saira Banu these days?

Is Saira Banu still acting and if not , whats going on with her and I would like to see the latest pics of her.

Saira Banu was seen with Dilip Kumar during the birthday of Tragedy King.
She had cared for her husband a lot, and as a wife also had been successful.
Souvik Chatterji.