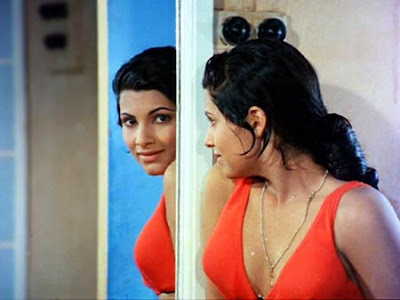 Dimple Kapadia had been one of the sizzling actresses of 70s, 80s and 90s. She stormed bollywood with her first appearance in Raj Kapoor’s film Bobby, opposite Rishi Kapoor. She brought a revolution in teenage romance and her lips in Lata’s songs had been trendsetters, including “hum tum ek kamre bebandh hai”, “jhut boley”, etc.

After marrying Rajesh Khanna she discontinued films but returned back in 1985, with even stronger performance in Sagar, opposite Rishi Kapoor and Kamal Hassan. The story had very strong script and she was elegant in displaying the fact that she loved Rishi and considered Kamal Hassan only as a friend. She was brilliant in her lips in the songs “sagar kinare” composedby RD Burman. During the same time she acted very well in Firoz Khan’s Jaanbaaz opposite Anil Kapoor. The film was related to the harm caused by use of drugs which killed Sri Devi in the film. As Dimple Kapadia had both the glamour required in bollywood films and very strong acting potentiality quality directors gave her challenging roles. She was outstandingin Gulzar’s Lekin, a film, which was based on folklore. She had made the songs “yara sili sili”, “kesariya balma”, sung Lata absolutely immortal with her classic performance. Suresh Watkar’s song “surmayi shaam” had very strong classical touch. Vinod Khanna supported her in the film with strong performance.

Probably she gave her best in the film Rudali, which involved the poor women of Rajasthan who were employed to weep for others when family members died. It was an offbeat film and she made it immortal with her passionate acting. Bhupen Hazarika composed landmark tunes including “dil hoon hoom kare”, sung by Lata, and the folksongs were given adequate expression by Dimple. She had made her presence felt evening films of late 1990s and the following period, like Dil Chahta Hai, opposite Akshay Khanna, where she played the role of a middle aged lady who was lonely and required company. Even the films where she had done character roles had made real impression like Pyar Me Twist, opposite Rishi Kapoor, which showed the romance of middle aged persons. If all her landmark films including Ram Lakhan and Kaash, opposite Jackie Shroff, and Prahar, Krantiveer, opposite Nana Patekar are analysed everyone will agree that she had style, romantic appeal and depth of acting in all those films. Viewers expect even better performances from her in the years to come.


By: Supriya Chatterji.
Posted by Souvik Chatterji at 1:53 PM

Dimple was brilliant in Lekin. I had learnt clasical singing and was asked to sing in functions in Nagpur the song "yara silli silli" several times from the film. I always got confused whether Lata had sung better or dimple hadacted better in the film. She was a genius
RumiChatterji.

Dimple was brilliant in the film Prahar. She was a widow and showed the pains they are supposedto take to bring up their child.
Supriya Chatterji.

Dimple was excellent in the film Kaash.
Souvik Chatterji.