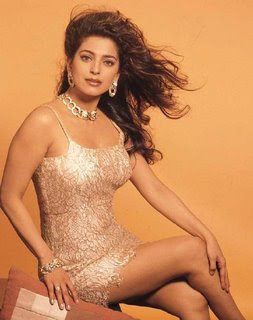 Juhi Chawla made a significant contribution in bollywood films during the 80s and 90s. Her first film with Amir Khan titled Qayamat Se Qayamat Tak, brought her recognition and she never had to look back during her career. The songs in the film composed by Anand Milind and sung mainly by Udit Narayan including “papa kehte hai”, were evergreen hits.

She had very good smile and that helped her to create a good impression in the minds of filmlovers. She had acted well in the film Darr opposite Sunny Deol and Shahrukh Khan. She was Sunny’s wife and Shahrukh Khan being a mental patient tried to kill Sunny, to marry her. The fear created in her mind by the insane acts of Shahrukh Khan was well expressed in the film. The songs in the film including “jadu teri nazar”, “tu mere samne”, etc., were very successful. She was very impressive in the film Jhoot Bole Cowa Kate, directed by Hrishikesh Mukherjee, opposite Anil Kapoor. It was film based on the story of the hero taking the recourse of falsehood to impress the father-in-law and gets ultimately caught. It is the third version of the two comedy films Golmaal and Naram Garam, where Amol Palekar and Utpal Dutta played significant roles. Juhi Chawla played the role of the daughter of Amrish Puri, in this film and exhibited her comedy impulse.

She acted opposite all the leading actors of bollywood films, during her span of career, including Rishi Kapoor, in the film Bol Radha Bol, Shahrukh Khan in the films Yes Boss, and Raju Ban Gaya Gentleman. Her performance was quite natural in all these films, including the role of a village girl in the film Bol Radha Bol. she was also impressive in the film Hum Hai Rahi Pyar Ke, opposite Amir Khan, with good lips in the song “ghunghat ke aar pe”. Her dancing skills were also appreciated by filmlovers. As comedy performance was very natural for her, she made notable contribution in the films where the comedy heroes had main roles, like Deewana Mastana, where Govinda and Anil Kapoor were the leading actors. If the contribution of actresses of the 80s and 90s are analysed, Juhi Chawla’s name comes after Madhuri Dixit and Sri Devi. Viewers expect god performance from her in the future even if she performs in character roles.
Posted by Souvik Chatterji at 6:14 PM

Juhi Chawla had simplicity of acting, that is why she was so successful. There was no unnecessary mannerism in the roles she played in Bol Radha Bol, Darr, etc.
Souvik Chatterji

Juhi Chawla showed the submissiveness of an unmaried hindu girl in an Indian society in the film Jhut Bole Cowa Kate. She was respectful towards her parents and that is why the role looked realistic.
CR Chatterji.

Juhi Chawla had good comedy impulse and she showed it in films like Duplicate where she matched the comedy perforance of Shahrukh Khan.
Rumi Chatterji.

Juhi Chawla is very beautiful actress her smile is very charming and sweet she is very good actress in the bollywood. It is truth she is natural actress I like her role in most of movies Darr, Aaina, Bol radha Bol, Raju ban gaya gentlemen, Hum hai rahi Pyar Ke . He is very good couple with Shahrukh and Aamir. She is very nice i like very much.