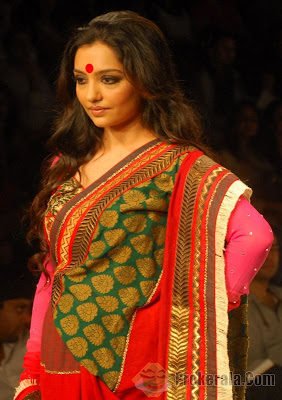 Superstar June Malia had rocked Zee Bangla Mirakkel Program on 28th September, 2011. She was the guest judge in addition to the other judges Rajatavo Dutta, Srilekha Mitra and Paran Banerjee.
Mir Afsar Ali every week had taken the viewers to a new place , on 28th September, 2011, to Durgapur, in West Bengal.

June Malia had been successful actress of many noted Bengali films like Ek Mutho Chobi, Mondo Meyer Upakhyan, etc. Vicky and Partho was the best performer of the day. They played a skit with Partho being a curd seller of a village. Both the participants had amazed the viewers in the past and did the same on 28th September, 2011.

It was amazing that Raju Middya did not get the maximum votes. He created characters of Durgapuja and mentioned that Paran Banerjee became Lord Shiva, Rajatavo Dutta became Mohishashura, Srilekha Mitra became Goddess Durga, when the Gods themselves went to see the idols in Durgapuja in Kolkata. May be that Raju Middya had created such a high standard that always the judges had expected even more.

Pallabi Mukherjee again did well. She made a skit relating to contesting election. She imitated both Koel Mallick and Rachana Banerjee as usual and did a great job. Sajal created a skit relating to Nightguard and did a great job. June Malia even danced on the song of “awesome sala”. The program was anchored excellently by Mir Afsar Ali.
Posted by Souvik-indrajalik at 9:41 AM