Jaikishan had been remembered on his death anniversary. 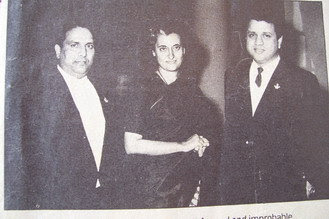 Jaikishan was remembered on his death anniversary on 12th September, 2011. He had left the world in 1971, and the great combination of Shankar Jaikishan got effected due to his death. The country remembered the great musical duo. At the same their combination with Shailendra and Rafi require special mention.
Poet and lyricist Shailendra had glorified the world of bollywood music with his romantic words. He had tremendous combination with legendary composer Shankar Jaikishan. Both of them in turn had magical relationship with immortal singer Mohammad Rafi.

In the mid-50s, all of them Shailendra, SJ and Rafi became superstars and icons in their individual departments. SJ composed excellent song with the words of Shailendra sung by Rafi,Mukesh and Lata in Raj Kapoor’s film Shree 420 titled “ramaiya vasta maaiya”. In 1955 the film ended up being blockbuster. In Seema, the song “kahan jaraha tu” stands out. Manna Dey’s song “tu pyar ka sagar hai” was also a masterpiece.

Rafi made the audience spellbound with the song “duniya na bhaye mohe” in the film Basant Bahar. Shailendra and SJ were brilliant as ever. Rafi’s song “mai rickshawala” in the film Choti Behen had realistic andaz. In Dev Anand’s Love Marriage, Rafi’s songs “kaha ja rahe the” had romantic andaz. In Shararat, the combination got together with the song “ajab hai dastan” which was very melodious.

The same soft romantic Shailendra with SJ and Rafi changed their gears in aggressive songs of Shammi Kapoor in the film Junglee with the songs “yahoo, chahe koi mujhe jungle kahe”, “ayi ayi ya suku suku”, etc. The combination made the audience spellbound in Rajender Kumar’s film Sasural with the song “ek sawal mai karoon.”

The unfortunate death of Shailendra in 1966 ended the marathon that was played by Rafi and SJ with the immortal lyricist for more than 20 years. His lyrics were used in films that were released later after his death in films like Shammi Kapoor’s Bhramchari, Rajender Kumar’s Jhuk Gaya Aasman and Dharti, Jeetender’s Mere Huzoor, to name a few.

Articles after articles can be devoted to the genius Shailendra, Shankar Jaikishan and Rafi who had produced only gems after gems during the golden age of Indian music. They had made the audience laugh, smile, cry and repent with the words, tunes and rendition of voices. The songs and the films should be preserved.
Posted by Souvik-indrajalik at 6:32 PM

jaikishan a great wizard we lost him on 12th sep. 1971 at the time when their glory of shankar jaikishan was at the peak. their tunes even after 50years is as popular as in those days when these tunes were composed. i wonder a song was composed in the year 1965 from the movie gumnam this song jaan pehchan ho was sung by the great mohd. rafi the use of guitar is so magnificent that when we listen this song even today it appears as it was composed a few days back this was the speciality of shankar jaikishan music for which they were popular all over the world.we always remember them.