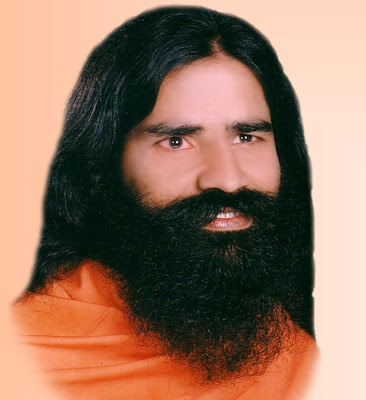 The master of Yoga and Ayurveda Ramdev Baba was the star attraction of Zee TV Saregamapa Little Champs Program held in Zee TV on 16th September, 2011. Ramdev Baba had been teaching different forms of yoga to millions of people all across the world and cured numerous diseases of many people.

Due to his presence the theme of the songs in the program was Bhakti Ras. At the beginning the 5 child participants Rimsha Deb, Niladri Chatterjee, Azmat Hussain, Salman Ali and Nitin Kumar sung songs relating to Ganesh Puja. Rimsha Deb sang the song “tum asha” which was actually sung by Lata Mangeshkar and composed by Hridaynath Mangeshkar. Alka Yagnik said that the rendition should have been little more soft considering it was a bhajan.

Niladri Chatterjee sang the song “aisi laagi lagan” which was originally sung by Bhajan king Anup Jalota. He sung the song with such brilliance providing each and every taan and harkat that Baba Ramdev came to the stage and sung the song himself. Alka Yagnik said if somebody had kajal she would have put it in the head of Niladri Chatterjee so that nazar na lag jay. Ramdev Baba said that those who get blessings of elders they never suffer from nazar. Swami Ramdevji said Anup Jalota had sung the song in his own way and brilliantly. But Niladri’s performance could not be compared with anyone. Swami Ramdev taught Niladri few yoga of the stomach and asked him to do it so that his obesity disappears. He is fat and other children make a mockery of that. Javed Ali said that Niladri Chatterjee had the touch of great Manna Dey Sahab and said he did a great job. Adnan Sami being his guru, appreciated his effort. Kailash Kher also congratulated him.

Azmat Hussain sang the song “jai mata di” from the film Aasha, which was originally sung by Mohammad Rafi and N. Chanchal and composed by Laxmikant Pyarellal. Azmat sang excellently. Swami Ramdevji said that Azmat should do the yoga relating to deep breadth and it can cure stammering of voice. He notice that Azmat never stammered during singing but stammered during speaking. Adnan Sami said that his pronunciation was better on that day. Nitin Kumar and Salman Ali sang their bhajans excellently and Swami Ramdevji said that they had brought down the barriers of religions. All the child contestants had made India famous and spread brotherhood feeling amongst every Indian.

Rimsha Deb was eliminated at the end of the show when anchor Jay Soni read out the report card. She cried a lot. But the viewers will remember her effortless performances in difficult songs like “lag ja gale”, “tum asha”, etc. Swami Ramdev had really rocked the show.
Posted by Souvik-indrajalik at 8:16 AM