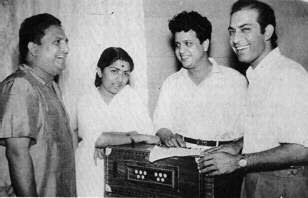 The listeners of music in India and abroad wish happy birthday to Lata Mangeshkar, the melody queen on 27th September, 2011. She had remained a sensation even in her 80s.

Starting her journey from the early 40s, Lataji created an impression with the songs “ayega anewala” in the film Mahal, composed by Khemchand Prakash. The songs of the horror film were picturised on Madhubala who later became a legendary star of bollywood films. Lata faced the competition from eminent singers Noorjahan, Suraiya, Shamshad Begum, Geeta Dutt, Asha Bhosle, Rajkumari, and others and emerged victorious in the 50s and 60s.

Her sweetness of voice compelled composers to give the best tunes ever created in Indian film history. Along with Rafi, Lata had the record of singing songs of almost all the composers of the golden age. Everlasting gems of Lata include “tu jaha jahan chalega” composed by Madanmohan, “duniya kare sawal” composed by Roshan, “hume tum mil gaye humdum” composed by Shankar Jaikishan, “phir teri kahani yaad aye” composed by Naushad, “ajare pardesi” composed by Salil Choudhury, “allah tero naam” composed by Jaidev, “piya tose naina lage re” composed by SD Burman, to name a few.

Lata had sung more than 30000 songs during her singing career which was more than 65 years long. She had sung for Madhubala, Meena Kumari, Nargis, Wahida Rehman, on one hand, and did sing for the new actresses of the 90s namely Madhuri Dixit, Juhi Chawla, etc. Her patriotic songs “aye mere watan ke logon” brought tears even in the eyes of Prime Minister Jawaharlal Nehru. Articles after articles can be devoted to the Indian nightingale, Lata who had remained an institution in different types of songs including Hindustani classical, folk songs, lift romantic songs, to name a few.

Lata Mangeshkar sung songs in more than 15 regional languages including Marathi, Bengali and others. She played a very significant role in Bengali film industry in the world of playback singing. Some of her hit songs included “jago” in Raj Kapoor’s film Ekdin Ratre, composed by Salil Choudhury, “aaj mon cheyeche ami hariye jabo” composed by Sudhin Dasgupta in Uttam Kumar’s film Shankhabela, to name a few.
Goddess Saraswati was very kind to the nightingale of India, Lataji, and that was the reason the sweetness of her voice remained intact for the last 60 years. Articles after articles can be written about the musical genius.
Singers of the present age consider Lataji as their idol and try to emulate her style. Even reputed singers like Sonu Nigam feel privileged to get his son record his son at such tender age with evergreen legend Lata Mangeshkar.

The listeners of music all over the world expect Lataji to continue the great work that she started 70 years ago. Her works should be restored.
Posted by Souvik-indrajalik at 8:43 AM