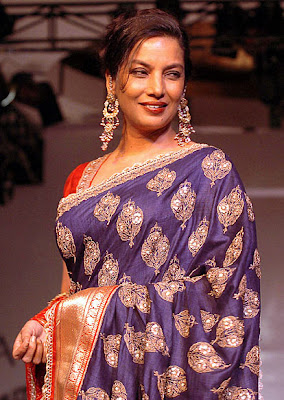 Versatile actress Shabana Azmi was remembered on her 61st birthday on 18th September, 2011. Many actresses spoke about her. Nandita Das had said that she had started her career with Fire opposite Shabana Azmi. She had great experience of working with the great actress. She acted with Shabana Azmi in a play named Diary of Anne Frank which was hosted in Kolkata, Bangalore and New Delhi. Director Mahesh Bhatt also said that his career also took a turn after Shabana Azmi acted in his film Arth.

Shabana Azmi gave an interview in Times of India on her birthday in 18th September, 2010, one year back. She commented on many things. She said that in theatre acting there is scope of underacting, as the viewers at the backseat may not recognize lack of expression, but in films that is not possible. For her film acting was a greater challenge.

She also said that acted in both commercial and parallel films. She acted during the transition of the 70s, when the actresses got roles opposite the angry young man played by Big B, Vinod Khanna and others. Female actresses started getting roles which were transformations from the ones of the 60s in films like Mai Choop Rahungi to films in the 80s like Khoon Bhari Maang. But her range was exposed in parallel cinema. She could express the complexity of female mind successfully in the art films directed by Shyam Benegal, Satyajit Ray and others.

When asked about her choice, she said that she would have accepted the role of a sweeper if director Bergman had offered her a role. He was her favourite director. In respect of actors, she commented that Tragedy King Dilip Kumar was her favourite actor. She grew up seeing his acting.

It is very significant that the actress of the callibre of Shabana Azmi who had won 5 national awards also used the name of Tragedy King, who had not learned acting from acting school, but the characters immortal with his sensitive performances over 70 years. The interview was very knowledgeable.
Shabana Azmi should continue her great work in bollywood films in future.
Posted by Souvik-indrajalik at 8:38 PM