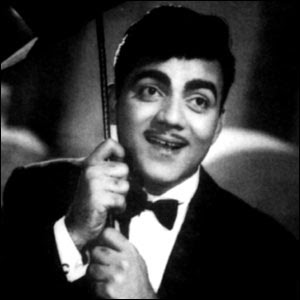 
Happy birthday to Mehmood and remembering him with Shankar Jaikishan and Rafi.

The viewers of bollywood films wish happy birthday to legendary comedian Mehmood on 29th September, 2011. He was an indispensable actor during the 60s and 70s. He had acted in different types of roles ranging from serious ones in Choti Behen to villainish roles in Pyaasa and obviously serio-comic roles in Gumnaam. He was the other comedian other than Johnny Walker, who had given lips in majority of songs in landmark films. His combination with Subha Khote and Dhumaal, was as brilliant as the legendary pairs of Dharmender Hema Malini or Shashi Kapoor Nanda.

Shankar Jaikishan had always been known to set trends and not follow any existing system created by the other compositions. SJ used Lata to her limit in Barsaat in the late 40s, during a time when the other female singers like Noorjahan, Suraiya, Samshad Begum, Rajkumari were also prominent in singing playback songs in bollywood films. SJ never stuck one single team and that was one of their secrets of success in bollywood films. In respect of Mehmood, it was a tradition for most of the composers to use Manna Dey to sing for Mehmood, most of which were very very successful. SD Burman used Manna Dey to sing “duniya bananewale” in the film Ziddi for Mehmood, where he used Rafi to sing the songs for Joy Mukherjee like “bolo bolo, aye dildaar”, etc. RD Burman used Manna Dey to sing the songs “sawaariya” and “ek chaturnaar” in the film Padosan for Mehmood. LP used Manna Dey to sing “o mere maina” in the film Pyar Kiye Ja, for Mehmood.

There are numerous other examples where Manna Dey was used by the composers to suit Mehmood. Shankar Jaikishan had something else in mind. He used Manna Dey in very serious classical songs like “sur na saje” in Basant Bahar, emotional songs like “tu pyar ka sagar hai” in Seema, or folk songs like “chalet musafir” in Teesri Kasam. When it came to Mehmood, SJ experimented with Rafi, and those songs probably are considered the most successful songs of Mehmood in his entire career.

The song “ajahu na aye balma sawan bita jai” in the film Saanjh Aur Sawera, picturized on Mehmood, stands out as one of the most classically oriented compositions of SJ for Rafi. The song had both appeal for the mass and also the class. The song “hum kale hai to kya hua dilwale hai” in Gumnaam, became a trademark song of Mehmood. Rafi almost reproduced the style of dialogue throwing of Mehmood in the song and it appeared to the masses that the song was sung by Mehmood himself. SJ used Rafi to sing the song “mai rickshawala” in the black and white era in the film Choti Bahen, during a time when Mehmood’s image was not created.

Rafi’s presence was felt in the films Beti Bete, Bhai Bhai, etc. where Mehmood had prominent roles and SJ composed the music of those films. Even the song “bakhma bakhma” in the film Shatranj became successful. Even in the duets that were sung for Mehmood, SJ created a new trend in allowing Suman Kalyanpur to sing some of the songs with Rafi or Sharda to sing some of them, in addition to Lata who had sung around 440 duets with Rafi during the golden age. The songs and the films of the legendary combination of Shankar Jaikishan, Rafi and Mehmood should be restored for their filmic appeal and versatile creations.
Posted by Souvik-indrajalik at 2:06 PM

Words fail when you describe Mehmood. He could carry film on his own. In sixtees the top three actors were wary of acting with Mehmood because he was a scene steal-er. Never was and never again...

Dear Nutsureji,
Thanks a lot for your comments. Mehmood's performance in each film differed with the other like Gumnaam had no similarity with Love In Tokyo which was different from Aarzoo.
Souvik Chatterji.