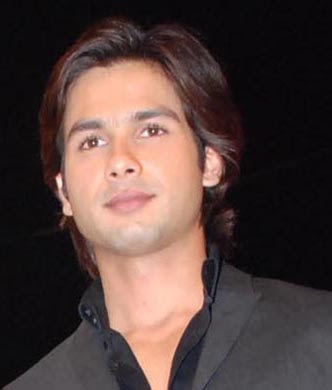 Shahid Kapoor had performed well in the recent films in bolywood over the last few years. He had shown his soft style of performance which created his separate identity. Besides he is aso a good dancer.

He started his career with the film Ishq Vishq opposite actress Amrita Rao. He showed his acting potentiality in the film Fida oppoiste Kareena apoor and Fardeen Khan. In 36 China Town he played the role of a friend of Kareena Kapoor who were involved in a murder mystery. A murder took place at 36 China Town and Akshay Khanna, who played the role of the detective in the film investigated the murder. There were lot of other persons who entered 36 China Town for different reasons, including Paresh Rawal. It took time for Akshay Khanna to investigate the murder as he could not find the motive initially. Shahid Kapoor and Kareena were also examined and questions were framed against them to unearth the truth. Ultimately it was found that the servants in teh house had murdered the owner. The other hjit films of Shahid Kapoor incldude Vivah and Jab We Met. Kareena Kapoor received the filmfare award for the best actress for her performance in Jab We Met. Shahid Kapoor did well in the romatic role and showed his dancing skills in the song "dil mocha hi mocha". The other song in the film "yeh ishq kya hai" was also successful.

The viewers expect Shahid Kapoor to continue his good work in bollywood films in the years to come.
Posted by Souvik Chatterji at 1:59 PM

Shahid Kapur is a great actor...I loved his movie Jab We meet and I am sure he will be a very big star one day...It's just the start....Shahid Kapur is the best.

Shut up all you stupid girls out there... It really isn't your problem if Shahid Kapoor marries Kareena Kapoor or Amrita Rao... And you say that you want him to be happy so don't marry Kareena Kapoor but how do you know that he isn't happy with her... I am just saying - Let them live their lives without you all commenting their every move...

i prefer sahid with karenaa..
i love u both..
hopefuly there will be 2nd chance ,,,

sahid i love u most

Shahid kapoor is gr8 actor.He just need one gud movie to show he is not less than shah rukh khan or amir khan.all the best to shahid.

Shahid Kapoor is going to be the next superstar in post Salman Shahrukh era.
Other than Ranbir Kapoor he has no competitor.
Souvik Chatterji.

The young generation is obsessed towards Shahid Kapoor.
Souvik Chatterji.