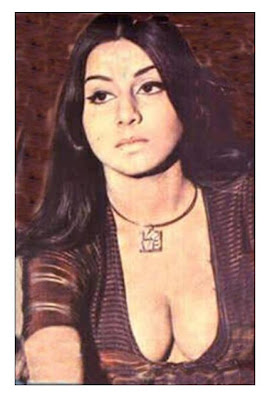 Rishi Kapoor and Neetu Singh were accepted as a successful romantic pair in the bollywood films of the 70s. They performed very well in the film Khel Khel Me, where by having a sport the college students including Rishi Kapoor, Neetu Singh, Rakesh Roshan entered into trouble where a group of lawbreakers headed by Dev Kumar involved them. Rishi and Neetu gave adequate lips in the songs of the film “ek mai aur ke too”, “humne tumko dekha” etc., composed by RD Burman. Probably the pair was most successful in the film Amar Akbar Anthony, released in 1977. It was a multi-starrer film directed by Manmohan Desai, where the three brothers played by big B, Vinod Khanna and Rishi Kapoor were separated and came to know each other at the end of the film. Rishi Kapoor played the role of a qawalli singer and gave excellent lips in the songs of the film including “parda hai parda”, “shirdiwali saibaba” sung by Rafi and composed by Laxmikant Pyarelal. Neetu Singh was the daughter of Mukri who never wanted her to get married to Rishi Kapoor. The romantic performance of Rishi Kapoor balanced the personality of Vinod Khanna and comedy performance of Big B. Both of them also acted in the film Rafoo Chakkar. It was a comedy film where Rishi Kapoor even pretended to be a girl and Paintal made a significant contribution in the film.

Neetu Singh left films after marrying Rishi Kapoor, otherwise the pair could have featured in other films as well. The viewers expect them to perform together in character roles in future.

Posted by Souvik Chatterji at 9:44 AM

yeah.They also featured in many flops and prominent among them was Zahreela Insaan , which i watched some days back on TV .Neetu singh looked amazing .she must have been the hottest babe of her time .

Both Rishi and Neetu showed their innocense in their performance in the film Khel Khel Me. They were young and impressive.
Rumi Chatterji.