In X Factor the participants and judges praised their idols on 30th July, 2011. 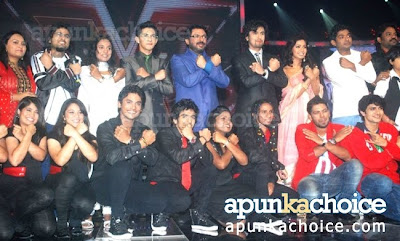 In X Factor the participants and judges praised their idols on 30th July, 2011.

On 30th July, 2011, the participants and judges praised their idols. Sonu Nigam sung a song to dedicate it to his idol Mohammad Rafi. Incidentally it was the birthday of Sonu Nigam on 30th July, 2011. Sonu Nigam’s mother appeared in the program and praised her son for the achievements till now.

After Sonu Nigam, Shreya Ghoshal said that her idol was Lata Mangeshkar. Everyday she had learned something new from Lataji. Judge Sanjay Leela Bhansali said his idol was Lataji and amongst composers he was a big admirer of Jaidev and RD Burman.

Diwana Group got the best performer recognition for the week according to the judgement of Sonu Nigam, Shreya Ghoshal and Sanjay Leela Bhansali. One day before Gulshan Grover came to the program and commented on the performance of the singers who dedicated the songs to the villains in the bollywood industry.

The viewers expect that the performers are going to perform even better in the weeks to come.
Posted by Souvik-indrajalik at 9:08 PM