Suresh Watkar is a musical genius. 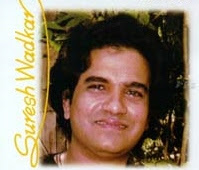 Suresh Watkar is a musical genius.

Singer and music trainer Suresh Wadkar is a musical genius and a living legend. Born in 1954, he took musical training from Acharya Jialal Vasant from the age of eight years.

He won the Sur Singar Competition in 1976, where Jaidev was one of the judges. Jaidev gave break to Suresh Watkar in the film Gaman in 1977 with the song “seene me jalan”. Suresh Watkar stormed bollywood with his majestic singing in Raj Kapoor’s film Prem Rog in 1982. The music was composed by Laxmikant Pyarellel. He received filmfare nomination for the best singer for splendid performance in the songs “mai hoon prem rogi” and “meri kismet tu”. The film did excellent business and the music became super hit. From that time Suresh Watkar never looked back.

In Sekhar Kapoor’s film Masoom released in 1983, Suresh Watkar was brilliant in the song “huzur is kadar na itrake chaliye” along with ghazal singer Bhupinder Singh. It was composed by RD Burman and was a masterpiece. In the film Sadma in 1983, composer Illayaraja composed two brilliant songs for Suresh Watkar, “ay zindagi gale laga le” and “yeh hawa yeh fiza”.

RD Burman used Suresh Watkar very well in the Parinda for landmark songs like “tumse milke” and “pyar ke mod pe”. Suresh Watkar stormed bollywood again with RK film Henna in 1991, where all his songs composed by Ravindra Jain were masterpieces. He showed his classical excellence in Gulzar’s landmark film Lekin, in the song “surmai sham”. It was composed by Hridaynath Mangeshkar.

One article is too small to highlight the greatness of the versatile genius Suresh Watkar who had contributed in the musical arena of India for more than 40 years. His admirers all over the world want him to continue the high class of classical singing and his music teaching in the years to come.
Posted by Souvik-indrajalik at 9:51 AM