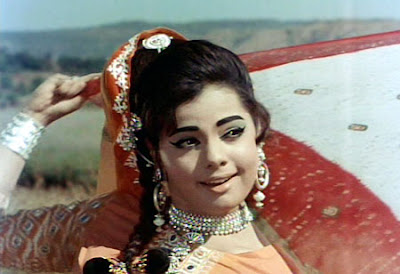 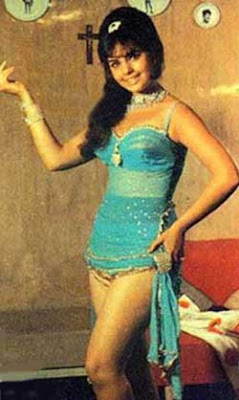 The viewers of bollywood films wish happy birthday to brilliant dancer and actress Mumtaz on 31st July, 2011. Mumtaz stormed the silver screen with her dancing capabilities in the bollywood films of 60s. Mumtaz initially acted in small budget films like Boxer, Tarzan, Kingkong, etc. She impressed the viewers with her item number in the film Brahmchari, opposite Shammi Kapoor, titled “aaj kal tere mere pyar ke charche”, where SJs rock and roll composition was given adequate expression by Mumtaz. She acted very well opposite Dilip Kumar in Ram Aur Shyam. She acted as a village girl who did not recognise the difference when Ram came to the village, who had identical get up as Shyam the person she loved. Her role of vamp in Biswajeet’s film Mere Sanam impressed everyone. She gave able lips in Asha Bhoshle’s song “yeh hai reshmi zulfon ka andhera”. She did well opposite Manoj Kumar in the film Patthar Ke Sanam.

Mumtaz matched Jeetender in the film Jeegri Dost. She was very polite and submissive in the film and gave good lips in the songs “raat suhani jag rahi hai” sung by Lata and Rafi and composed by Laxmikant Pyarelal. All her films opposite Jeetender became super hit including Ek Nari Ek Brahmchari, Khilouna, Katputli, Roop Tera Mastana, etc. She had been very successful in the films opposite Rajesh Khanna most of which everlasting hits like Aap Ki Kasam, Roti, etc. In Aap Ki Kasam, she was thrown out of the house by Rajesh Khanna due to misunderstanding, who repented for the cruel act throughout his life. He returned back when Mumtaz had solemnized the marriage of her child at the end of the film.

She also did well in Pyar Kiye Jaa, opposite Mehmood. It was a comedy film where Mehmood wanted to be a director but never got a producer who invested money in his film. He was duped by Shashi Kapoor and Kishore Kumar who posed to be rich men, and when he could not direct any film he ultimately married Mumtaz. Mumtaz showed her rock and roll dancing style in the song “o mere maina”, sung by Asha and Manna Dey and composed by Laxmikant Pyarelal.

Mumtaz also acted in a number of films opposite Firoz Khan, including films like Apradh. She received filmfare award for the best actress for her performance in the film Khilouna. She left films in the late 70s and did not appear even in character roles after that. Viewers still feel that she had acting talent in her and if she wanted she could have acted in modern films. She received filmfare lifetime achievement award too. Still she is remembered by the viewers and whenever her films like Loafer, opposite Dharmender, or Patthar ke sanam, opposite Manoj Kumar is shown in TV Channels, viewers refresh their old memories about her sweet performances in these films.
Posted by Souvik-indrajalik at 9:23 AM