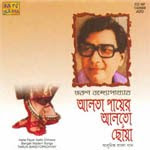 Singer Tarun Banerjee had sung everlasting songs during the golden age of Bengali music; that is the 50s and 60s. He had a deep voice with good pitch. Two of his songs “chalo Rina” and “o suleman” haunted the bengalies. “chalo rina” was composed by Abhijeet Banerjee. The song spoke about the singer calling his girlfriend to travel with him along the red village road, and red flowers blossom and the rural life unfolds itself. “o suleman” was written by Pulak Banerjee and composed by Prasanta Bhattacharya. “o suleman” had Arabian tunes embedded in them. So it talks about a girl who was seen by a seller, who could not find her again. The romantic appeal of both the songs “chalo rina” and “o suleman” haunted the bengalies for generations. His song “mor malanche bosonto nai” was very popular during the 60s. He was sublime in the song “champakoli go koto name dekechi tomae” composed by classical singer Manobendra Mukherjee. The song “konokchapa dhan” composed by Prabir Mojumdar and sung by Tarun Banerjee was equally popular.

He was excellent in the songs he had sung for poet and composer Salil Choudhury. One of his legendary songs included “eso kache eso, kono kotha bolo” which became immensely popular during the 60s. His song “ankhi cholocholiya keno gele choliya” composed by Nikhil Chatterji also became very popular during that period. His other hit songs during that period included “tolpar tolpar moner kotha”, “magnelia aar kamelia phool”, etc.

He also sang songs which were compositions made out of rhymes. One of the examples included “ek ekdin megh kore mon bole hariye jai”. He also sang the song “champa amar ogo jago” which was written by Salil Choudhury and composed by Sudhin Dasgupta. Very rarely the two highly talented lyricist and composer Salil Chodhury and Sudhin Dasgupta came together to compose the legendary songs. “champa amar ogo” was one of them.

He had sung songs which were in the form of ballads. Some of them included “modhumati jay boye jay”, “cholo Rina”, “kajol nodir jole”, “aar deri nei”, to mention a few. He equally sublime in other modern songs like “alta payer”, “elona se elona”, etc.

He also made valuable contribution in Bengali film music. His song “haridasher bulbulbhaja tatka taja khete moja” in the film Shriman Prithviraj was very popular. The song was composed by Hemant Kumar and the film was directed by eminent director Tarun Majumdar. It is not possible to highlight the contribution of Tarun Banerjee in Bengali modern songs in a small article, who had contributed during the 50s, 60s and 70s. His songs and films should be preserved and restored.
Posted by Souvik-indrajalik at 6:19 PM