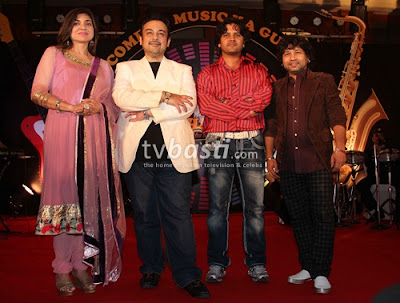 On 15th July, 2011, it was gurupurnima. It was a blessing in disguise for music lovers all across the country. All the gurus in the Music Contest Zee TV Saregamapa Little Champs sang brilliant songs on that day.

All the child participants in the contest including Niladri Chatterjee, Shilpi, Salman, and others dedicated their songs to their gurus. Singer Javed Ali sang the song “tum mile” in his usual majestic style. Mahaguru Alka Yagnik very honestly said that she never knew the song was sung by Javed Ali.

At the end Alka Yagnik sang the song “jane kitne dino ke baad gali me aaj chand nikla” in her silky voice. She almost enchanted everyone in the show. Very significantly all the judges had disclosed about the creation, composition of those songs, spoke about the lyricists and composers and history of the recording of the songs.

For the child participants it was a very learning experience and they paid their best tribute to their gurus by singing their songs. Competition apart the program Zee TV Saregamapa had created a friendly atmosphere where Kailash Kher with his pure hindi, Adnan Sami with his urdu alfass, Javed Ali with his classical terminology and Alka Yagnik with her musical terminology had praised each other and encouraged the children after telling them their limitations and asking for improvements.

Some contestants had faced defeat at the hands of the others and that may have depressed many music lovers. For example Asmat lost out one week before and Alka Yagnik had confessed that her mother also became sad about the decision. But she had judged the contestants on sheer merit basis, without bias and prejudice.

The viewers expect that all the participants will do even better in the forthcoming rounds and all the gurus will enlighten the music lovers all across the country with their profound musical knowledge.
Posted by Souvik-indrajalik at 8:45 AM