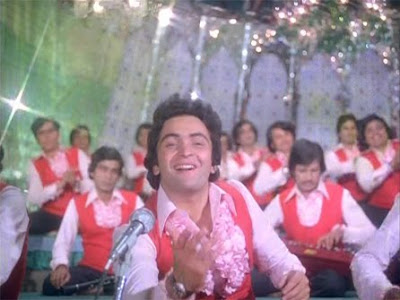 The viewers of bollywood films wish happy birthday to Rishi Kapoor on 4th September 2010. He had remained as one of the most romantic actors that bollywood had ever produced.

He started his career as a child artist in Raj Kapoor’s film Mera Naam Joker in 1971. He stormed bollywood films with his romantic performance in the film Bobby in 1973. The film did great business and Rishi Kapoor received the filmfare award for the best actor for his performance in Bobby. Raj Kapoor as producer and director started a new innings with a new team of Laxmikant Pyarellal as against Shankar Jaikishan after the death of Jaikishan in 1971. LP had huge contribution in the music of the films of Rishi Kapoor for the next ten years.

From that time onwards Rishi Kapoor remained one the most romantic actors in bollywood films. His films Amar Akbar Anthony in 1977, Laila Majnu in 1977 and Sargam in 1978 were the greatest musical blockbusters of the 70s. The songs composed by Laxmikant Pyarellal, Jaidev and Madanmohan in these films became everlasting hits. The notable songs of Rafi and Lata in this film included “koel boli”, “parda hai parda”, “dafliwale”, “barbad muhobbat ki dua”, “is reshmi pazeeb”, to name a few. LP received the filmfare award for the best composer for 3 Rishi Kapoor’s films namely Amar Akbar Anthony, Sargam and Karz from 1978 to 1980.

Rishi Kapoor’s extraordinary capability of giving lips in these songs separated him from other actors of that era. His films Zamane Ko Dikhana Hai, Hum Kisi Se Kum Nahi and Karz created history. He showed his dancing skills in every type of songs of Rafi and Kishore including “hai aga dushman zamana”, “bacchna aye haseeno”, “dared dil”, “om shanty om”, “puchona yaar kya hua”, to name a few. RD Burman and Laxmikant Pyarellal probably gave their best music to Rishi Kapoor in the 70s and 80s.

In the 80s, Rishi Kapoor’s films Duniya, Sitamgar, Saagar, Chandni, Cooli, Naseeb, did fantastic business. He got the opportunity of acting opposite stalwarts in the industry namely Dilip Kumar in Duniya, Dharmender in Sitamgar, Kamal Hassan in Saagar, to name a few. In fact due to presence of Rishi Kapoor, producers and directors created romantic stories during an era when Big B, Vinod Khanna, Shatrughun Sinha dominated bollywood with action films. Even in the 90s, Rishi Kapoor’s films Bol Radha Bol, Damini, etc., were appreciated by the audience. He was successful opposite young actresses like Juhi Chawla, Meenakshi Sheshadri, who were one generation younger than him.

After the debut of his son Ranbir Kapoor in the film Sawaariya, Rishi Kapoor switched to character roles. In 2009 also Rishi Kapoor did well in films like Dilli 6, Pyar Me Twist, Luck By Chance. He received Star Screen award for the best supporting actor in 2010 for his performance in the film Love Aaj Kal. In 2010 he is busy with the films Chintuji and Sadiyaan.

The viewers expect him to continue the high standard of acting in the years to come and continue the legacy created by Prithviraj Kapoor and Raj Kapoor.
Posted by Souvik Chatterji at 5:43 PM