Sobakshi Sinha has three in a row with Salman Khan. 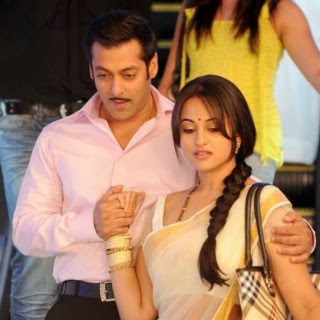 Sonakshi Sinha has three in a row with Salman Khan.

Actress Sonakshi Sinha has three in a row opposite Salman Khan. On one hand she had a dream debut with Dabaang in a row to do business more than Rs 150 crores.

She had bagged the role for the sequel of Dabaang at the outset. It requires no mention that in the sequel too she is supposed to act opposite Salman Khan. It is great news for her.

Sajid Nadiadwala had also signed her opposite Salman Khan in the remake of South Indian super hit film Kick. The film will be directed by Shirish Kunder.

Sonakshi Sinha will be the most luckiest debut maker in the history of bollywood. The success of Dabaang speaks about that. Firstly she had created the lady luck for Salman Khan who was not having super hit film for more than a year after Wanted.

At the same time the viewers accepted her opposite Salman Khan who was more than 20 years older than her. Other newcomers generally had made debut opposite young actors like Imran Khan, Ranbir Kapoor, Shahid Kapoor, etc.

Thirdly in an out and out action film like Dabaang, her performance had been appreciated inspite of Salman Khan stealing the show. It has rarely happened in the past. Amisha Patel did a great job in Kahona Pyar Hai, but the media had highlighted the work of Hrithik Roshan and all the credit went to him.

Deepika Padukone also made a dream debut opposite Shahrukh Khan, but she was not so lucky to sign three films opposite the same superstar opposite whom she had got her first blockbuster.

Sonakshi Sinha should grasp the opportunity and do well in future.
Posted by Souvik-indrajalik at 8:47 PM