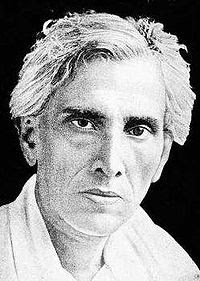 The literary community all over India wish happy birthday to literary giant Sarat Chandra Chatterji on 15th September, 2010. He got the title of “katha sahityik” as his words used to put life in the bodies of trees, plants, animals and he portrayed rural life in India in the most lucid manner possible.

He was born in the village of Debanandapur in Hoogly near Kolkata, West Bengal. His two pieces of literature, that is Devdas and Parineeta had lived the test of time and became immortal. Films in bollywood and other languages had been made a number of times on the classic literature. In fact tragedy king Dilip Kumar got his image by brilliant depiction of Sarat Chandra’s character Devdas in Bimal Roy’s film in 1955.

In the Bengali film industry, Sarat Chandra Chatterji’s literature was indispensable and eminent directors experimented with his immortal literature. Legendary actress Kanan Debi featured in many Bengali films based on Sarat literature most of which were directed by her husband Haridas Bhattacharya. Some of the notable films included Mejdidi, Annadadidi O Srikanto, Nababidhan, etc.

The other notable films included the literature of Sarat Chandra relating to biography of himself, which was called the Srikanto series. Uttam Kumar played the role of Srikanto in the films Rajlakshi Srikanto and Kamallata. Bosonto Choudhury played the role of Srikanto in the film Abhaya O Srikanto. Sarat Chandra’s other pieces of literature used in Bengali films included Bardidi, Ramer Shumoti, Nishkriti, Sabyasachi, Grihadaha, Chandranath, etc. The list can go on.

Sarat Chandra Chatterji received Kuntolin award for the creation of Mandir and also D Lit. Degree offered by University of Dhaka. His literature should be translated in all the leading languages in India and other languages abroad. It is because his literature had shown the path which was followed by other literary giants like Bibhutibhushan Banerjee, Munshi Premchand and others.
Posted by Souvik Chatterji at 7:25 PM