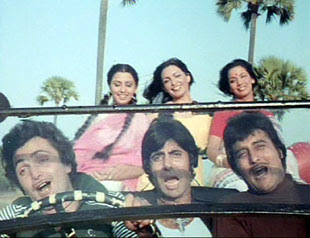 The viewers of bollywood films wish happy birthday to Shabana Azmi on 18th September, 2010. She had remained an institution by herself. She had been considered to be the greatest performer in bollywood films along with Smita Patil, Naseeruddin Shah and Om Puri.

She started her journey with Shyam Benegal’s film Ankur in 1974. With her debut, the trend of parallel cinema began in bollywood. There existed a clear difference between glamour girls in bollywood and the serious actresses who graced parallel cinema. Shabana Azmi featured in both forms of films but became unparallel in parallel films. She concentrated on the inner emotions of the characters that were played. She was unparallel in the role of a step mother in Shekhar Kapoor’s film Masoom. Her performance was as brilliant as the performance of Naseer in the film. She was the step mother who initially was attached to her own blood-related daughters but later was moved by the sensitiveness of Naseer’s son Jugal Hunsraj whom she accepted at the end of the film.

In Goutam Ghosh’s film Paar, she showed the life of daily wage earner in Kolkata along with Naseeruddin Shah. The scene where Shabana Azmi swam across the Ganges near Bandha Ghat along with a pack of animals which were supposed to be reached the respective destination, body language, physical effort, expressions all get mixed into one. Goutam Ghosh himself accepted that it was the best film he had made till date.

She was as powerful as Smita Patil in the film Arth. Her husband Kulbhushan Kharbanda led an extra-marital relationship with Smita Patil and Shabana Azmi wanted to leave him for those reasons. She also played an important role in Oscar Winning Director Satyajit Ray’s film Shatranj Ki Khiladi. The other notable films which ended up being masterpieces include Khandahaar, Dharavi, Sparsh, etc.

Her performance opposite Big B in the film Mai Azaad Hoon, in the role of a journalist requires special mention. She received national award a number of times and won it consecutively for three years from 1983 to 1985 for Arth, Khandahar and Paar. She was even unparallel in the film Godmother and won the national award once more. She had created a benchmark which had been followed by actresses of the present era including Dimple Kapadia and Tabu. The viewers expect her to continue the high standard of work in the years to come.
Posted by Souvik Chatterji at 8:37 PM