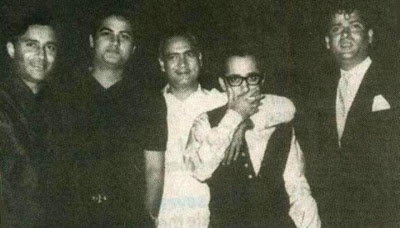 He acted opposite most of the leading actresses of the 50s and 60s and most of his romantic of the golden age remained hits. Some of his successful films include Taxi-Driver with Nalini Jayant, CID with Wahida Rehman and Shakila , Tere Ghar Ke Saamne with Nutan, Kalapani with Madhubala, Kalabazar with Wahida Rehman, Jewel Thief with Vaijayantimala, Jaal with Geeta Wali, etc. His production banner Navketan was the pivot around which his brothers Chetan Anand and Vijay Anand contributed a lot.

In the 60s, Dev Anand acted in successful films like Guide, Jewel Thief, etc. Guide was based on the epic literature of RK Narayan. Dev Anand received the filmfare award for the best actor for his performance in the film Guide. He made an English version of Guide too. In Jewel Thief he successfully acted in the role of a detective to combat the group of burglers led by Ashok Kumar.

From the 70s Dev Anand started directing his films including Prem Pujari, Hare Rama Hare Krishna, etc. Even as a director he showed his class. As an actor he was known for his stylish andaz as he emulated the mannerisms of Hollywood actor Gregory Pegg. Another factor for which Dev Anand is still remembered is the quality music given in his films.

Dev Anand received Dadasaheb Phalke Award for his excellence in Indian cinema. He even at his late 80s is interested to produce and direct films. Few years back he made the film Mr. Prime Minister. The viewers expect him to continue the great work that he started 60 years ago.
Posted by Souvik-indrajalik at 6:32 PM